Oculus Go, Facebooks and Oculus’ standalone VR headset, is shipping today. On Amazon and in stores at BestBuy, you can purchase the headset. The news came during Facebook’s F8 developer conference. The standalone headset appears to bridge the gap between the Oculus Rift and the Gear VR. Instead of using a phone or a powerful computer, it uses a built-in system. While the headset is mobile and named after Oculus, it acts more like a Gear VR. All the Gear VR games are playable, and the quality of the screen and graphics is on par with the Gear VR.

Still, having a wireless VR headset is a big step forward. Before, you need a phone that supported Gear VR or a powerful gaming PC to us an Oculus Rift.

There are two models of the Oculus Go a 32GB model and a 64GB model. The 32GB version is $199, and the 64GB model is $249. Both come with a wireless controller and have access to the games available on the Gear VR. Bestbuy stores have them in stock today, and you will have the chance to demo Oculus Go in store starting tomorrow (May 3rd, 2018). Amazon’s pre-sale sold out extremely quickly, but according to Amazon, they will be able to get the headsets to your doorstep by Friday. 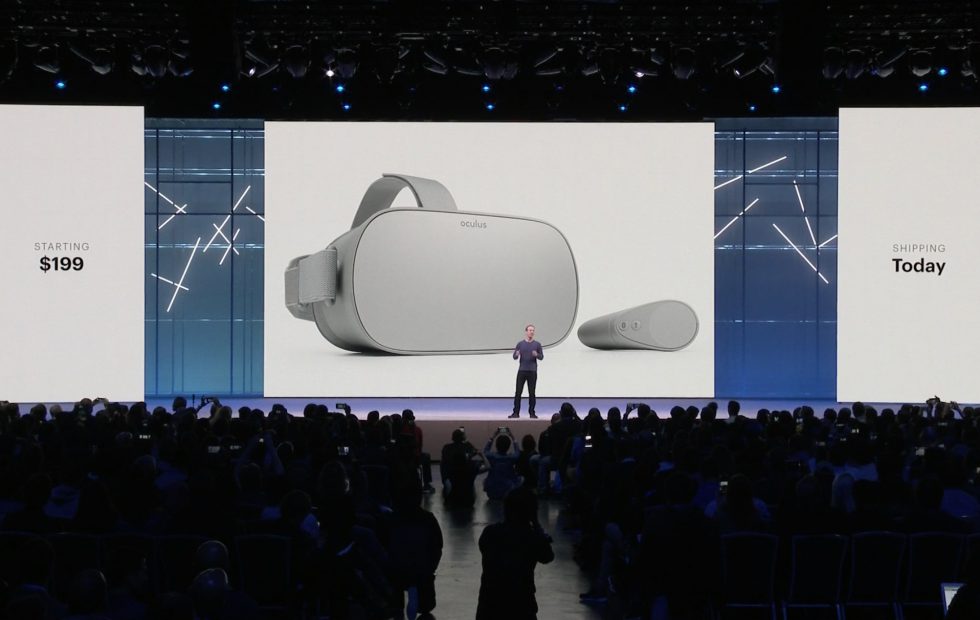 The Oculus Go isn’t a robust headset competing with the Oculus Rift or the HTC Vive. It is meant to be a step up from the Gear VR which often comes bundled with the Galaxy S line of phones but a step down from the Oculus Rift. The price is $200 and to keep the price low they opted for a lower resolution screen. The lower resolution in VR means less realistic gameplay and scenes but was needed to offset the cost. Another compromise is the tracking of movement. Instead of the 6DoF, Facebook is using only 3DoF which means no head tilt recognition or another more refined tracking. The other specs include:

Using a Qualcomm Snapdragon chip allows the Oculus Go to play the same games as the Galaxy S9 would be able to play when attached to a Gear VR. This enables the Go to access a library of thousands of games and apps. Users will not have to worry about what is supported or what they will have to access once they buy the headset. Popular titles will work just as they would with the Gear VR.

As developers build new and exciting games for the Gear VR, they’ll get their games on the Oculus Go. There will be no worries about building for multiple platforms to reach the widest audience.

Facebook is taking a step to getting everyone a dedicated VR headset that isn’t doubling as their phone. There is already a significant market for the VR headset, with the Gear VR being a favorite item for Galaxy owners. Using the Oculus name gives the gadget a lot of authority and trust among ordinary consumers who already know the name for the higher end, more advanced VR headset.

At $199 it becomes an easy Christmas present for parents and something that is an impulse buy for anyone wanting to experience VR. I am going to Bestbuy tomorrow to try the headset one and see if it’s worth my money! Let me know in the comments below if you’re going to buy the Oculus Go or opt for the Gear VR or Oculus Rift!