Anchor’s a popular audio app where you can create a radio show or podcast with no experience or equipment beyond your phone. You simply hold the phone up to your ear and the app starts recording. After that, you publish those podcasts to your station. Those podcasts were never truly a traditional podcast because they were stuck in the Anchor app – until today.

Anchor can now publish your recordings, or what they like to call segments, to Apple Podcasts or Google Play Podcasts. Before your “podcasts” were only available to your listeners for 24-hours, but with the new episode feature, anyone can listen anytime and forever on iTunes or Google Play. In the future, Anchor plans to let anyone access their RSS feed to distribute their podcast to more services. 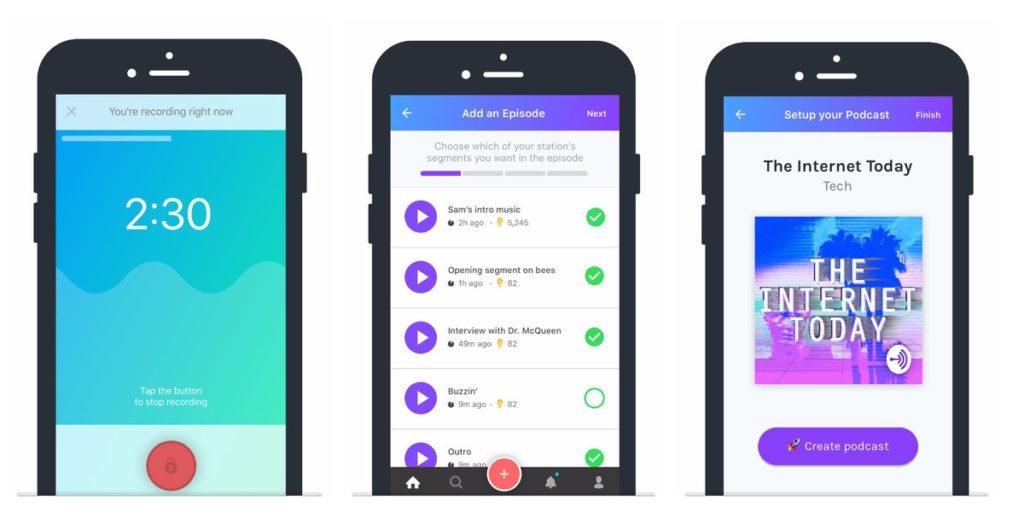 Anchor is looking to make podcasting easy and mainstream

The podcasting app is still relatively small with only 50,000 to 100,00 downloads in the Google Play Store and likely a similar number on iTunes App Store. Traditional podcasting is a larger market but it’s still somewhat unknown. Most iPhone users don’t know that their phone has a built in app to listen and subscribe to podcasts. Anchor is just starting to take off. The surge of attention comes after version 2.0 of the app rethought podcasting in a Snapchat-esque way.

Sara Dietschy, a popular YouTuber, is topping the charts and bringing a new audience to the app. The Verge is using the app to test new podcasts without having to use up company resources in starting new feeds. There are also dozens of other breakout personalities leveraging the app to build an audience on the app and on other platforms. It’s still early for the community, which means anyone could break into the top charts with a little effort.

As the app starts to become more popular, it’ll give anyone access to podcasting without having to go through the tedious setup process. You’ll record, click a few buttons, pick a podcast name, and Anchor will publish your podcast. The method we use is; recording locally, edit, uploading to Soundcloud than use an RSS feed to publish to iTunes and Google Play. It’s not easy for someone who wants to get started quickly. Anchor could cut out Soundcloud for us if they start allowing longer uploaded audio segments. It would make the app a staple for podcasters and could give the company a way to monetize the app that’s currently ad-free and doesn’t have any subscription. The app could become Medium but for the podcasting world.

Let me know what you think! Are you using Anchor or are you going to check out the app now? Also, we’re using the app to just talk about the daily news in a more timely manner – Digital Bounds.