Smart home products continue to pop-up left and right, but they’re all focus on the tech-savvy DIY-er. The SmartThings V2 hub isn’t my first time working with IoT devices. Before buying the hub, I used the Wink Hub with a dozen or so sensors. I am also using Philips Hue lights throughout my home. I am not going to write about my experience with the Wink system, because I had a serious of problems that made me want to switch. At the same time, Samsung’s hub has quickly become the number one choice for IoT devices, and for a good reason. The hub works with most standards, is affordable, and is easy to set up. That is not to say there are some drawbacks to the hub.

In this review, I will touch on the pros, the cons, and what makes the Samsung SmartThings v2 Hub the best choice for smart home technology.

At $149 for the starter kit, you get a lot of bang for your buck. The kit comes with the hub, two door/window sensors, a smart outlet and motion sensors. It gives you everything to set up and gets a taste of having an intelligent home. However, you have to think how many windows or doors you want to connect to the hub. I would need to buy ten sensors total to have every window and door connected with sensors. At $35 a sensor, it isn’t cheap to get the whole home connected. There are ADT accessories and monitoring, but again, the secondary sensors are going to cost a lot more than most people initially budgeted.

In the end, buying the DYI SmartThings kit is cheaper than buying something from Simplisafe or more traditional security systems from ADT or even Nest.

Setting up the sensors wasn’t a natural process, I had a lot of hiccups when I attempted to connect the sensors to the hub. I was within 10 or 15 feet of the hub, but Samsung did say to stand within 5 feet of the hub when setting up sensors. Once I did manage to get them connected to the app, it was smooth sailing. I didn’t screw any of the sensors into the wall or on doors. Instead, I used the 3-M stickies included in the box. 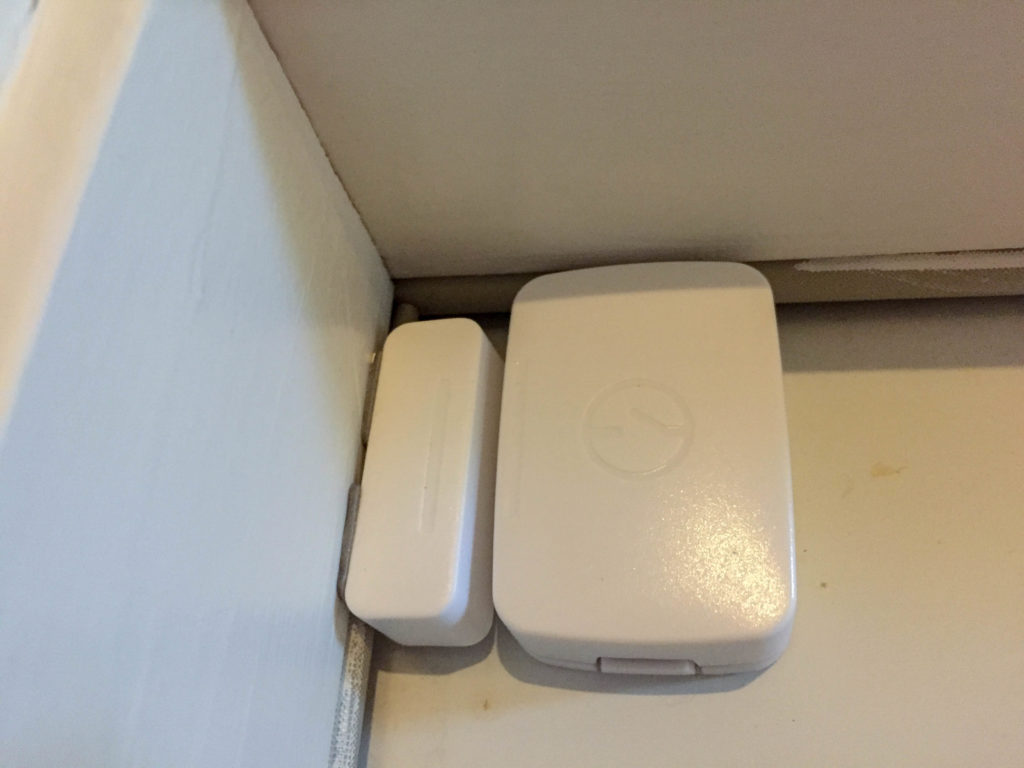 The Samsung SmartThings Hub supports a wide range of devices from Samsung tvs to Yale locks. The hub also supports smart lights, ovens, doorbells, smoke detectors, and much more. The only substantial ecosystem SmartThings doesn’t support the Nest family of products. If you already have some Nest products in your home, the hub won’t support it, and you’ll be left managing two systems separately. I’ve heavily invested in Nest with cameras, smoke detectors, and the thermostat, but I was willing to have two different systems in my home.

The Hub is a connected to the router through an ethernet cable, similar to Hue or other systems. There is Bluetooth inside the hub and two USB ports, but they’re not functioning until future updates. The hub comes with a back up battery option (four AA batteries). This allows the hub to work even when the power is out, or the internet is out. The sensors are all battery power that can easily be switched out, so you won’t have to buy a new sensor every couple of years.

SmartThings launched on Kickstarter and Samsung bought the company in 2014. Since the purchase, Samsung hasn’t radically changed the services or hardware, but they did make a significant change to the app. There are two apps, an old one and a newer one that works with the V2 model. I’m not 100% sure why Samsung wouldn’t just update the app and not have two separate apps in the app store, but it’s likely related to support for new IoT standards. I experienced some problems setting up the door sensors and motion sensor in the new app. I had to resort to installing the older app and getting the hardware setup.

The app does offer a lot of easy ways to automate your smart home, being able to set based on time, action, or through voice. The new app is well designed, functions well, and overall is a vast improvement from the original one.

Compared to other smart hubs, Samsung has taken a prominent hub and made v2 substantially better. There is a lot of future proofing from Samsung in v2 with Bluetooth and USB ports being placed on the new hub. The transition from the old app to the new one is slightly confusing, and I found a lot of hiccups with getting new devices setup on the more modern app. I hope Samsung keeps up with the market, adding new standards and making the hub more useful as we keep moving on.

In the end, I recommend the Samsung SmartThings V2 Hub of Wink’s options or the smaller companies who have crept in. The hub is affordable, semi-easy to setup, and support a large number of standards and smart devices.

You can buy the SmartThings starter kit on Amazon for $149 now which gets you the hub, two door sensors, a motion sensor, and a smart plug.