The Legend of Zelda franchise is one that can be looked toward as one of deeply rooted tradition. After the original 1986 game, which implemented a vast and broad open world that the player was free to explore at will, and a sequel that followed, we got landmark titles like A Link to the Past and Ocarina of Time (sorry Link’s Awakening) that not only changed the very ideals of what a video game could be, but also cemented a formula that Nintendo would use for the franchise for years to come, except for Majora’s Mask and some spinoffs I suppose. This formula has invariably been the backbone of the franchise’s growing issue with hand-holding as the games have evolved. Not to say the games are bad — they’re actually quite good when they’re at their best, but they’ve been a far cry from what the franchise was when it started. Until now that is. 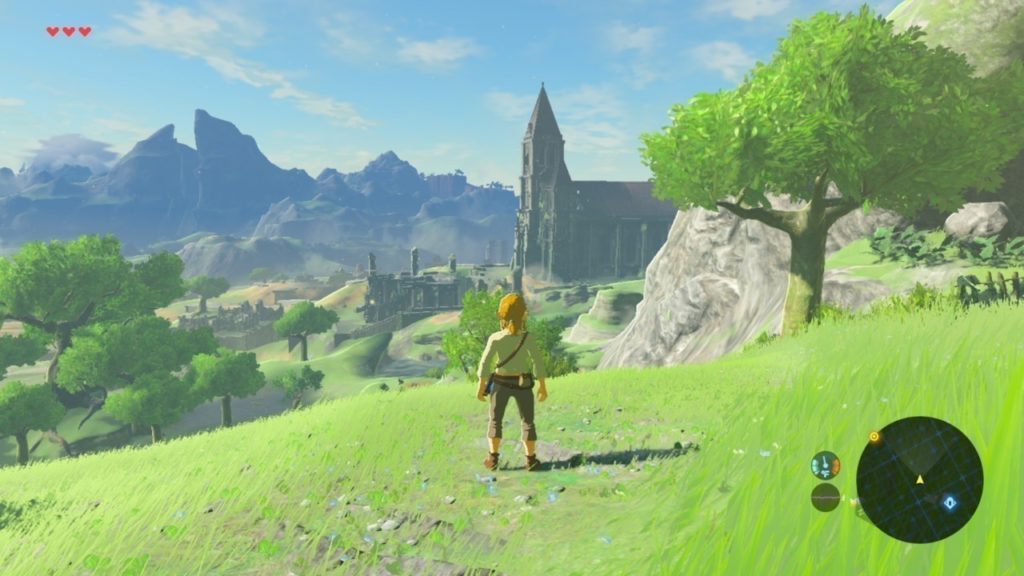 After so many years of following a stagnant formula I suppose it only makes sense that Nintendo would return to their roots for Zelda: Breath of the Wild, I guess I just didn’t expect that they would do it so well. Breath of the Wild begins with Link waking up from essentially a hibernation chamber, a voice guiding him out into the land of a fallen Hyrule as he looks on at his astonishing surroundings: a boundless world ripe with endless possibilities. The player truly is Link in this moment and beyond it as they are immediately thrust into this world and expected to just go. Yes, there is a starting area with a few objectives to help you grasp some of the game’s mechanics but once you’re able to leave and truly start your adventure you are given nothing but the name of a town to go towards (if you want) and whatever weapons you’re able to pick up along the way.

It’s in this way that the game truly shines. Nintendo built a world that finally feels truly open to the player to do anything they want. Pick a direction to go in and just explore. The game doesn’t care to be your guide. Particularly early on, you’re going to come across enemies that are too strong for you, areas that you can’t explore because your stamina is too low. But the player isn’t discouraged from exploring whatever area they want to explore; there are no invisible barriers, closed off areas, or anything that seems artificially built to limit a player’s personal adventure. It’s true; you can even run straight to the final boss if you so desire (though I don’t recommend it). Players are encouraged to learn about the world, to train throughout it to become capable and experienced enough to go back to areas that they would not have survived in otherwise. Exploration is rewarded this way. There are towers to climb that don’t grant you new items, instead revealing a section of the map that was previously empty. Climb to the top of a mountain? Your prize is a new vantage point to seek out new waypoints and objectives. The world of Hyrule is the reward, a pretty big one in fact. 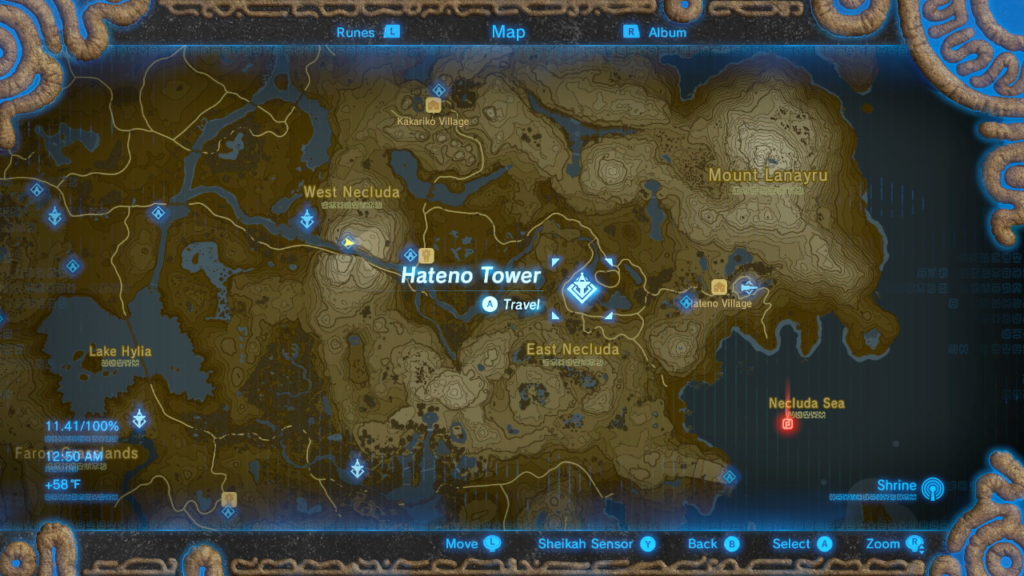 The world map is absolutely colossal. There is no way this isn’t the biggest open world game I’ve ever played, which makes it all the more impressive that the world doesn’t feel empty. Sure, there are sizable stretches of land that don’t have much besides…well…land, but this helps accentuate the sections of the map that do have highlights. There are always new waypoints to discover: stables where you can register and store horses, new towns and villages all with their own theme music and distinct population (I’m over 40 hours in and am still discovering new towns), enemy camps and hideouts with valuable loot, new weapons, armor, and shields all free for you to discover if you go to the right places. And of course, there are 120 Shrines for you to find.

The Shrines are essentially bite-sized dungeons for you to tackle throughout the world. Because of this game’s focus on its open world, regular dungeons aren’t nearly as prominent or important this time around. There are only four sections of the game that resemble traditional dungeons that take the form of what the game calls Divine Beasts and can be tackled in any order that you please. Unfortunately, these Beasts don’t present too much of a challenge and in most cases can be beaten in 30 minutes or so if you have a good idea of what to do. It seems the Shrines are meant to make up for this though I can’t say they provide much of a challenge either. Instead of having dungeon-specific items you acquire throughout the game as in previous titles, Breath of the Wild gives you 4 different “Runes” at the very beginning of the game. These are essentially magic abilities that are used throughout the world and in Divine Beasts and Shrines. The problem is that the core concepts of the Runes make it awfully clear how each puzzle is solved and many of the Shrines are actually fairly straight-forward, save for a few great ones that left me genuinely stumped. While having all of the Runes straight from the beginning is great in terms of exploring the game at free will, it seems it isn’t very conducive for creating super intricate puzzles (I suppose the game catches itself challenge-wise with its general combat difficulty which is a pleasant surprise). If the Shrine doesn’t have a puzzle, it has a combat challenge against a miniature version of the game’s vital enemy type: the Guardians, essentially robot squid things that fill exploring the areas close to Hyrule Castle with tension beyond belief. But the combat challenges are all essentially the exact same, making them more tedious than anything; once you’ve fought one at each difficulty level, you know how to take them down. The best Shrines are the ones that involve puzzles in the open world that must be solved in order for the Shrine to reveal itself. These involve obtuse (but not impossible) hints and riddles and shows some genuine trust in the player to be able to figure it out for themselves.

Although the Shrines and Divine Beasts essentially become items on a checklist and are often relatively simple, I can’t deny the feeling of satisfaction that comes with marking them off. It feels good when you stumble across a new Shrine to solve and the game has such a wondrous sense of adventure about it that makes the Divine Beasts feel more exciting than they may realistically be. That is absolutely the best thing the game has going for it: the sense of wonder. Hyrule is a land that is constantly out to get you, whether it be with horse-riding Bokoblins shooting arrows your way or natural obstacles like the weather being frigid cold, forcing you to cook up some spicy peppers to be able to withstand it; I don’t know if I’ve played another game that feels so alive. 40 hours in and I’m still constantly learning new systems and physics that the game has to offer (did you know you can shield surf???). The beauty of the game is how everyone crafts their own adventure. Everyone has different stories about their play-through because everyone is exploring the game under their own authority instead of being strung along by the game designers, which is an extraordinary change of pace for this franchise. I still love the previous Zelda entries as well, don’t get me wrong, but it certainly says something about Breath of the Wild when its biggest flaw is that it retroactively makes the previous games seem worse. I’d say that’s an accomplishment.