Netflix announced today subscribers would have the ability to download the entire Netflix library for offline playback. There has been rumor Netflix would bring offline playback, but Netflix has dispelled the rumors multiple times. Now anyone with a Netflix subscription, no matter their tier, will have the feature to download movies and tv shows.

The feature is ideal for anyone watching their mobile data usage, traveling on a flight, or stuck in areas with poor connection often. Amazon introduced this feature with users raving about how Netflix needed the feature. Now you’ll be able to watch Gilmore Girls, House of Cards, or Orange is the New Black anywhere you go.

We’ve broken down everything you’ll need to know about offline playback from supported devices to how much space you’ll need to clean out for a whole season of your favorite show.

How to start downloading shows and movies 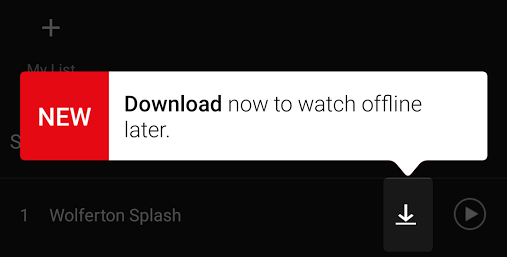 To start downloading movies or tv series for offline viewing, you’ll need a device with iOS 8.0 or later and Android 4.4.2 or later. You’ll also need to have the latest version of the app, and if you want to conserve mobile data, a strong Wifi connection. When you’re looking at movies or tv shows to watch you’ll see the download for offline playback button next to each movie or episode.

What devices are supported?

As I said above, you’ll need iOS 8.0 or Android 4.4.2, which means most current generations iPhone’s and Android phones. You’re also able to use iPads, Android tablets and laptops, but Windows phone is most notably missing from the list. Laptops or desktops are not supported, and they’ll more than likely never get support, due to DRM and copyright issues.

How much storage space do you need?

On average Netflix uses 700MB per hour to stream a standard definition movie or tv show, with an HD quality video taking 3GB per hour. This can take a toll on mobile data, and even stain a Wifi network. An SD episode of House of Cards is almost an hour long and will take close to 300MB of space, while the HD version is using 500MB. If you wanted to download multiple episodes for a long flight or car ride, the phone could fill up quickly if you only have the base storage.

How long will the downloads work?

Downloading a movie or tv series doesn’t mean it’ll stay on your device forever. Netflix has set different expiration times for different content, but movies or shows expiring in 7 days; you’ll see how much time is left to watch before you need to press download again. There are also certain movies and shows which when you hit play you’ll need to watch within 48 hours, a lot like if you would rent a movie from Google Play or Vudu.

How to manage your storage

The movies and tv show you download won’t show on any file manager, likely for protecting the content. This leaves you wondering what you have downloaded or how to clean out files, but Netflix will have ways to manage downloaded content. There will also be a button in settings to delete all offline content.

Once you have freed up space, downloaded the latest app, and double checked your phone is supported; you can start binge-watching your favorite show anywhere in the world. I’m looking forward to using the feature when I’m flying, because we all know how terrible in-flight wifi is, not to mention how expensive it can get.

Tell us in the comments below if your going to using the offline feature on Netflix or contiune to stream all your movies and tv shows.