Microsoft launches a $7 version of Minecraft made for the Gear VR. The games are available through the Oculus Store, which allows you to install the game on your Oculus Rift. We’ve seen the game demoed on the Microsoft Hololens (augmented reality), but hadn’t seen a version made for VR until now.

Everyone’s played Minecraft at least once in their life or at least seen someone playing Minecraft. It’s a different game compared to most open world RPG’s, and classic First Person Shooters on the market – it can get addicting. You tend to get immersed into the world itself focusing on different tasks like building a shelter, finding food, and crafting tools, but what if you could be inside the pixelated world of Minecraft?! 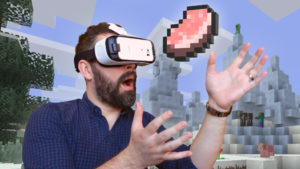 Microsoft has done exactly that! Minecraft: Gear VR Edition is available for $7 on the Oculus Store. It is the “VR” version of Minecraft PE for iOS and Android. You can Explore your world, play with friends, and fight mobs all in the VR edition. If you have a Gear VR, it would be worth checking out. Although you will need a controller to play, which isn’t that big of a downside, I was hoping to use a real pick ax or sword. Instead of real tools, Oculus recommends the SteelSeries Stratus XL.

Have you played Minecraft in VR? Let us know down in the comments!