The debate over “content blockers” on iOS have exploded, and for good reason. Apple’s taking a direct stab at Google through blocking their main revenue stream: Ads. It’s also preventing small and large publisher from generating ad revenue from serving mobile ads. The large publishers like Buzzfeed have bet big on native ads like sponsored post or paid phone reviews. On the other hand, small publishers don’t have the resources like larger publishers. Their main and only revenue is through the ads that are served on the desktop and mobile web. This is why ad blockers are such a huge problem from publishers across the web.

I’ve abstained from commenting on the issue, because I didn’t know which side of the battle I was on. I hate obtrusive and annoying ads that slow load times. I use an ad blocker on my desktop browsers, and place expectations on small outlets that don’t bombard you with ads. I’ve recently installed the Crystal ad blocker to stop all the crappy ads from filling my Safari browser. The mobile web has completely change since I’ve done downloaded the app. Doing this has changed my on the argument over ad blockers.

I see and know that ads on the web are broken, but no one’s changing anything because it’s been generating thousands of dollars for the small publishers. This site depends on ad revenue to continue on paying for servers, writers, and trips to press events like SXSW or CES. However, I see sites like Technobuffalo shoving unwanted and annoying ads that slow down site and distract from the content. I understand why they have to serve those ads up to make money and pay rent, and sometimes there isn’t any other choice. The ads make you want to either claw your eyes out or venture to somewhere else to read the article. The ads pop up above all the other content, and the only way to close the pop up is by a little ‘x’ hidden at one of the corners. It’s frustrating and easier to download a ad blocker.

The argument beyond blocking ads on the web, which isn’t a new idea by any means, is that Apple has enabled the ‘normals’ to block ads easily. On a desktop browser you’ll have to download an extension to block ads. Their isn’t any built in ad blockers or settings that even hint at ad blockers. On iOS Apple built settings right in Safari and ad blocker apps have been trending on the app store for a few weeks now. They’re getting the kind of exposure that viral games like Flappy Birds do, and it means more and more people are going to buy the apps to download. They may not fully understand what they do, but once they have it they won’t go back. 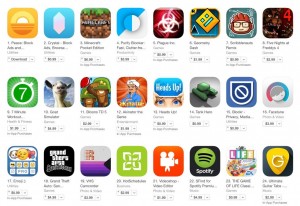 Ad blockers on iOS are going to shape web publishing a lot over the next few months, but it’s going to hopefully be for the better. The ads will get quicker, cleaner, and less obtrusive. A lot of publishers will look for native advertisers to help their site from going under, and social services like Twitter, Google and Facebook are going to swoop in to help Facebook already offers Instant articles which publishers can serve ads on for 100 % of the revenue, or have Facebook serve their own ads on. Twitter and Google are both working on ‘instant articles’ that are open source that cache a page and instantly load on mobile. More publishers will push for mobile apps so they can serve ads on those without the fear of the ads being blocked. All in all, money from ads are still going to fund small and larger publishers. It’s just going to come in different forms and ways than traditionally. I’m a little worried about all of this, but in the end I’ll have to start serving native ads or sponsored content similar to Buzzfeed.

Tell us if you’ve installed an ad blocker on your iPhone in the comments below!