When I’m in a meeting, I often turn to a note-taking an app like Microsoft OneNote or Google Keep. The problem with taking notes digitally, at least for me, is my in the inability to type fast enough or adjust when I need a custom chart or drawing. I more often than not turn to a physical notebook and pen. After the meeting, when I get time, I will transcribe the notes onto a virtual note – Evernote, OneNote, or Google Keep. The process is far from perfect, but it gives me the flexibility of being able to dot down numbers, equations, draw charts, or use special characters without having to think for more than a split second. The Rocketbook Wave notebook is meant to fix this problem by appealing to my need to jot down notes in the real world.

The Rocketbook Wave is a mashup between the virtual and physical space. At first glance, the Wave looks like a typical spiral notebook. However, when paired with the iOS or Android app, the pages are quickly scanned and digitized into copies of the physical page. Then – this is where the Rocketbook Wave stands out – once you fill the whole spiral notebook, you place the Wave into the microwave and nuke it for a couple of minutes. The ink disappears, and you have a fresh notebook! Sounds like magic but it’s an amazing gadget.

In this review, I am going to break down the features and price of the Rocketbook Wave. 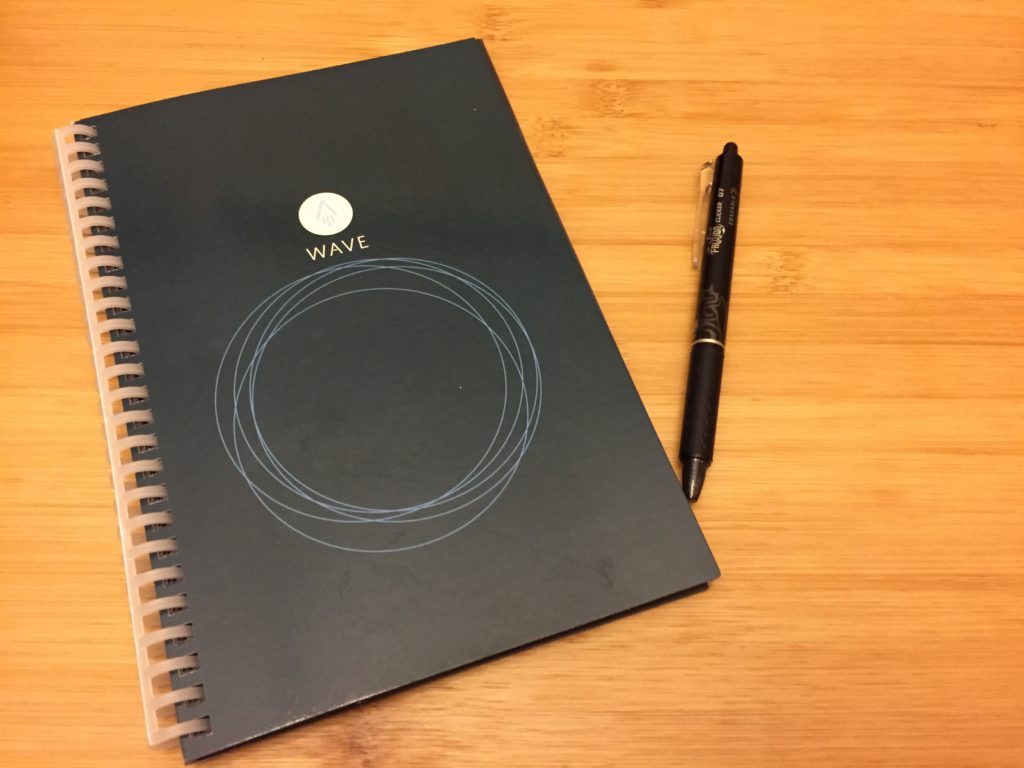 The Rocketbook Wave comes in two sizes – Executive and Standard. The standard size $27 and the executive is $24 on Amazon. Either size you choose, they’re both priced reasonably. Both the notebooks come with one Frixion pen, which is the pen compatible with the Wave. If you want more colors or more Frixion pens, there is a $41 bundle which comes with 7 Frixion pens.

These notebooks are reusable until they fall apart, you can fill them five times before you need to throw it out. Getting your money’s worth from the notebook shouldn’t take long if you’re using the Wave day in and day out.

In my experience, after you’ve microwaved the notebook, you can still see faint marks from the previous text, but it is still usable. Being able to use the companion app to scan all the pages allow for something more permanent once I do erase the whole book.

The Rocketbook Wave is a novel idea for a notebook, but it isn’t for everyone. If you do favor taking physical notes and still having a digital copy, the Rocketbook companion app will save you a massive amount of time. There are other notebooks which allow you to scan and digitize your notes, but they’re not capable of being microwaved. At the price point of $24 and $27

, they’re worth the value if you fill them a handful of times. I am using the notebook in my daily life, and I’ve filled almost half of the notebook up. The iOS app is a great tool to keep my analog notes digital. Microwaving the notebook still is crazy, but I love telling everyone about the notebook and what it can do. It’s a great way to break the ice with someone.

Let me know what you think about the Rocketbook Wave in the comments below! Are you going to buy one or are you going to stick with the old school pen and paper?