Google Glass launched in 2015 with a lot of hype at first, then came the backlash. Everyone assumed you were always filming or not paying attention to them. I wanted a pair of the exclusive augmented reality glasses, but the $1,500 price tag was relatively expensive. Now flash forward to 2017 where Snap Inc, the parent company of Snapchat, has launched a pair of sunglasses with a camera in them. Snap has unoriginally named them Spectacles.

Every journalist, analyst, and technology “guru” is comparing them to Google Glass. They’re nothing like the failed Google X venture. Snap Inc made a choice to launch Spectacles outside the technology hub of San Francisco with the use pop-up vending machines, aptly named Snapbots, as the only way to buy them. It created a game for the biggest Snapchat fans who had to venture to the Grand Canyon in Arizona, Austin, Texas, and dozens of other picturesque locations. Now they’re being sold online with the same price tag as they are at the vending machines, and while the shipping time is 2 to 4 weeks many customers have reported getting them earlier.

Spectacles distanced itself from Google Glass by calling them a toy and pricing them at $129. The other big differentiator is Spectacles has a small light on the sunglasses to indicate to others around you that you’re recording a Snap. The small feature means strangers, family members, and anyone around you knows when you’re filming. Well, at least they know something is going on because there’s a light coming from your sunglasses.

Even if Spectacles are socially acceptable, are they worth it? In the review, I’ll talk about the Snapchat app, how the hardware feels, and even how everyone in public recognizes the sunglasses.

What makes the Spectacles stand out from Google Glass, traditional cameras, or action cameras isn’t the fact you wear them on your face. It has a lot to do with the 115-degree wide angle video the sunglass record and how they’re shown in Snapchat. The video is best described as circular video, which doesn’t have a landscape and vertical alignment. You’re able to rotate the phone like a steering wheel, seeing different parts of the video. It’s nothing we’ve seen before, which makes it’s incredibly hard to describe. The best way to understand the video is with this GIF: 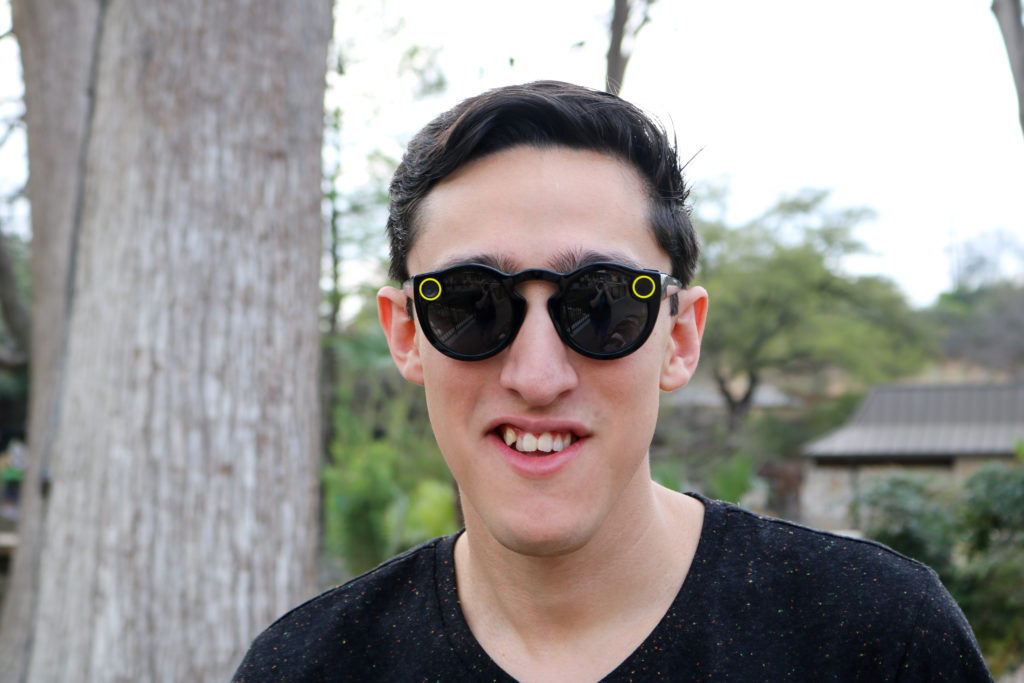 I waited to write about Spectacles until I went to SXSW. I wanted to see how often the Spectacles were recognized and how often people asked me what they were. What surprised me was how little I saw Spectacles around Austin, Texas. While I was asked fairly often what the glasses were, many folks either ignored them altogether or simply said they’d seen a few around. Outside of SXSW proper, I’ve been asked by dozens of people what the glasses were, or they pointed me out in a crowd because of them. The reception is always positive, even when they found out I was filming them.

At home in San Antonio, I’ve been asked what the sunglasses were. The people are asking were always amazed when I demoed the video and sunglasses to them. Having Spectacles on is one of the few times anyone feels comfortable enough to talk about a piece of technology I’m using. 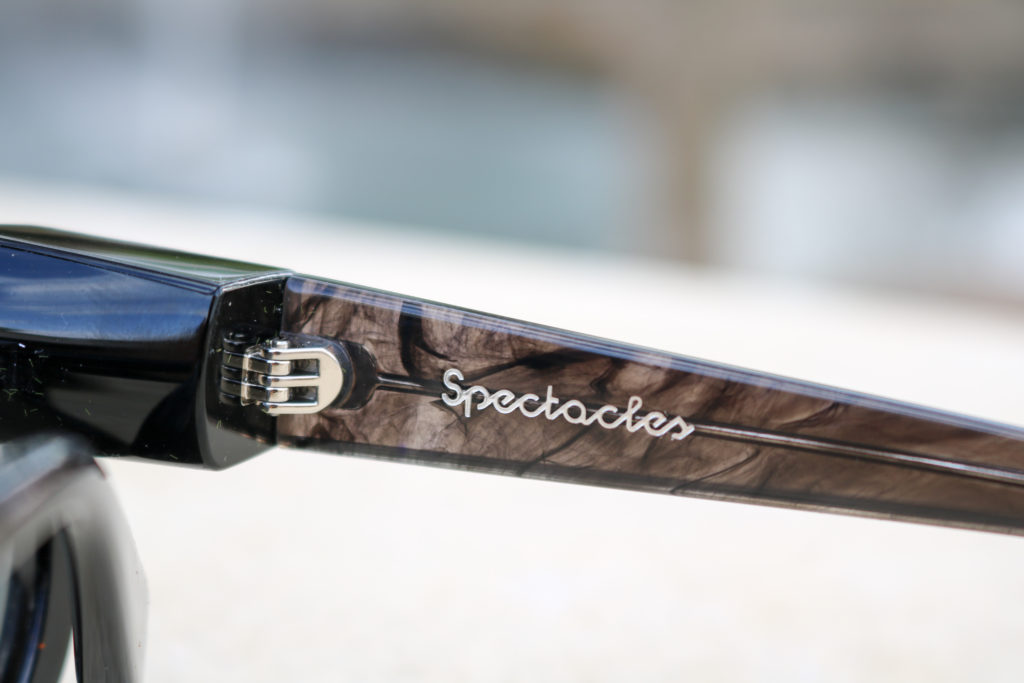 The sunglasses used a classic round look with the camera on the edge where the frame meets the lenses. On the other edge is the light to indicate your filming, and other than these two additions they look like another pair of sunglasses. The frames are sturdy, and the lenses don’t easily scratch. The sunglasses feel like a premium pair, with a limited amount of cheap plastic. They feel solid in the hands, with a little weight making them feel great.

Syncing the snaps to the phone is effortless but also slightly cumbersome. The Snaps from Spectacles automatically start syncing over in SD on the iPhone, and if you want the HD version, you’ll need to connect the Wifi created by the Spectacles. It’s a similar process for connecting and controlling a GoPro. It’s not user-friendly, nor is it a fun process when you just want to share your snaps. Snapchat has always been fun and easy to use the app because you take a picture, customize it, and send it. There wasn’t anything in the way. Now, this process is only for iOS, on Android the Snaps are HD by default. Yes, the process is faster, smoother and generally less irritating, you’ll have to remember Snapchat on Android isn’t the greatest app around. The app is slow, crashes often, and Android cameras, for the most part, are not as good as their iPhone counterpart. Now if you have an Android phone you’ll, of course, get the better experience, and have a new way to share HD quality snaps in a snap.

Sharing to other platforms

As I mentioned above, the video is circular when shared through Snapchat. If you share the video through Facebook, Twitter, Instagram, or other platforms the video is circular. You’ll have a square video with a circular video in the center showing all of the videos you shot. The circular video lets everyone know you shot the video on Spectacles, but lets you share everything you saw and not just a cropped part of the video. It’s unclear if Snap will ever let you share an uncropped version, but for now, sharing this video is a status symbol. It shows others you have Spectacles, something that will bring in a lot of interest from people on other social platforms.

Spectacles are a novel way to share videos through Snapchat. I’m able to share first person views of events, outdoor adventures, and other scenarios where I couldn’t hold a phone. The premium feel of the sunglasses combined with the general usefulness of the sunglasses makes Spectacles a must buy. I’m hopeful the wide-angle, circular video takes off on more platforms like Twitter, Facebook, Instagram, and well, the whole internet. It crushes the whole vertical and horizontal video debate, which Snapchat had normalized vertical video only a few years ago. As more Snapchat fans are exposed to Spectacles, we’ll see more of them out in the wild.

My biggest gripe about the sunglasses is how attached I’ve come to them. I’ve swapped my Ray-Bans out for Spectacles, which I never thought would happen. If you have $129 to spare, pick up Spectacles online or try to find one of the elusive Snap bots across the United States.

I’d love to hear from you! Have you purchased Spectacles yet, or is there something stopping you from picking them up? Lastly, if you own a pair – do you use the sunglasses as you would a regular pair or swap them out with a less obvious pair?