Soylent is a meal-replacement drink available through Amazon, their online stores, and select stores around the country. I’ve been on the fence about the product, partly because of the stories of people getting sick from the powdered version. The drink is made from biodegradable algae in bioreactors, a dystopian drink if I ever heard of one. The name also reminds many of the 1973 film Soylent Green, which the Soylent was made from humans and not some engineered algae. One way or another I was half way pumped to try out Soylent, whether it was the original flavor or one of their newer flavors.

Before I describe the taste, I wanted to share why I’ve always wanted to try Soylent. I can often skip a meal or two or three before realizing that I haven’t eaten all day. It’s a big problem but also profoundly unhealthy. The idea of having a meal replacement excited me, but I’ve heard about how terrible they are or how they aren’t providing enough nutrients. Soylent at least claims to offer 20% of your nutritional value in one bottle. 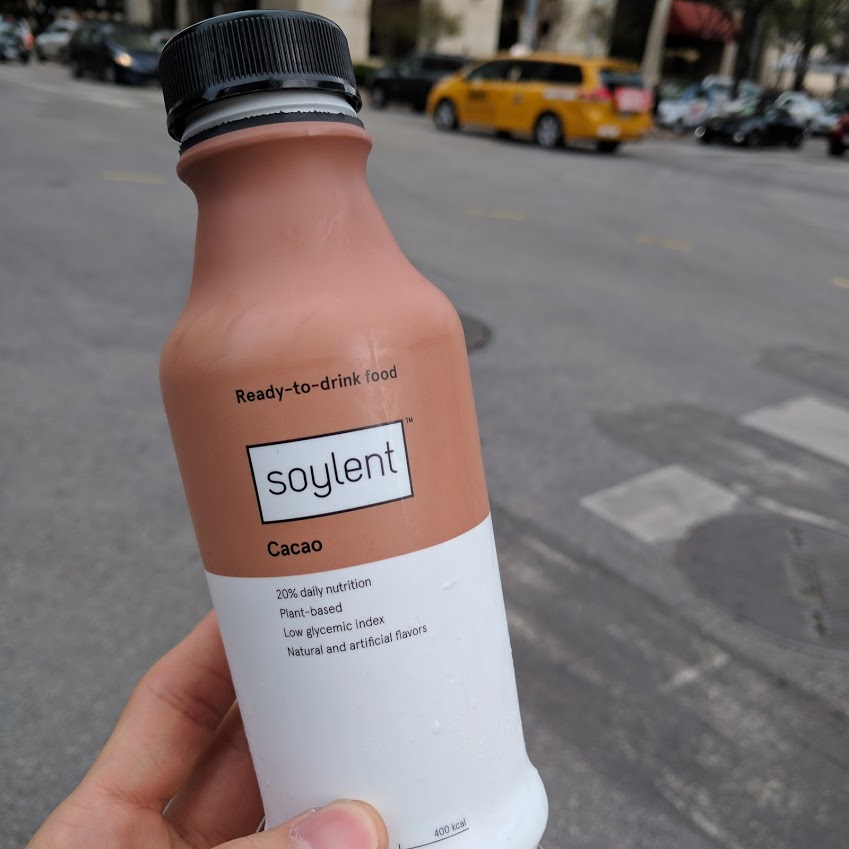 Soylent has a decent but powdery taste

I first tried the cacao flavor, then the coffiest flavor, but I haven’t had a chance to try the original or nectar flavor. The cacao is sweet enough to drown out the powdery taste, but you’ll still notice it. It’s similar to drinking muscle milk or other meal replacements. The coffiest flavor is the Soylent meal plus a cup of coffee – perfect for breakfast! The coffee flavor is a great kick in the morning, but still, has the powdery taste that’s common in all the Soylent. Imagine a coffee without all the sugar and milk, that’s the coffiest flavor.

Overall, I wouldn’t replace every meal with Soylent but I’m open to replacing breakfast with the coffiest flavor. I would have a hard time not eating pizza, bacon, avocados, and other fruits if I went full Soylent. If you want a meal replacement Soylent is the best startup option out there, at least for now.

That’s enough about what I think. Tell us what you think in the comments below! Would you try Soylent or have you tried Soylent?