Although the Tinker Board is a single board computer like the Raspberry Pi, it manages to pack double the RAM, a faster processor and supports 4K video. The video below is an unboxing, showing more closely how powerful the gadget is and just how beautiful they look in real life.

Here are some of the more impressive specs:

The Tinker Board runs a custom version of Debian Linux and supports Kodi for home streaming. Hexus is reporting there are plans to expand the current OS support with different Linux distros including Ubuntu and openSUSE. 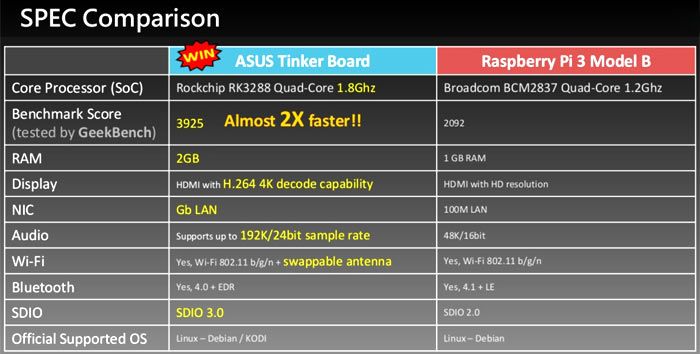 While at £55 (approximately $68), the micro-computer is almost double the price of the $35 Raspberry Pi 3. ASUS has the upper hand here over the smaller, independent device makers with their clout in the computer industry and large amounts of money.

These single board computers are used in learning environments, science experiments, and during other small projects. I’m looking forward to seeing developers and students alike build more powerful projects with the Tinker Board. I’m also interested in seeing how Raspberry Pi responds to the new single board computer out of the market – maybe they’ll update their hardware and add a new tier you can upgrade to.

Tell us in the comments below what you think about the Tinker Board, and whether you’d buy the computer over other options like the Raspberry Pi.