Do you Remember Google Voice? I didn’t, at least until today. All over the blogosphere, there’s talk about Google’s refresh of Google Voice. There’s been rumored about the update for a couple of weeks now, but I didn’t believe Google would show attention to the project. They’ve left the project, known as Grand Central before Google bought it, unkempt for over five years. The last update to Google Voice wasn’t an upgrade, but more of an omen to Google spring cleaning the service – they pulled the core Google Voice service from Voice and used it in Project Fi. You’d pay for Project Fi and get call forward, transcripted voice mails, and text through Hangouts. You wouldn’t see Google Voice, use the apps, or even know you were using Google Voice. Instead, everything would be handled through Hangouts, and if you visited Google Voice, it would redirect to Project Fi.

Today’s update is unusual and makes Google’s messaging clients even more confusing. We now have Hangouts, Allo, Messages (Only on Android for default SMS), and Google Voice? If you do choose to use Google Voice to manage your none Project Fi number, you’ll get SMS synced across all your devices, call forwarding, and transcripted voicemails anywhere. The problem is you’ll use Google Voices’ app over their other messaging apps. Confusing right? Why wouldn’t they sunset Google Voice and sync everything with Hangouts like they’re doing with Project Fi? 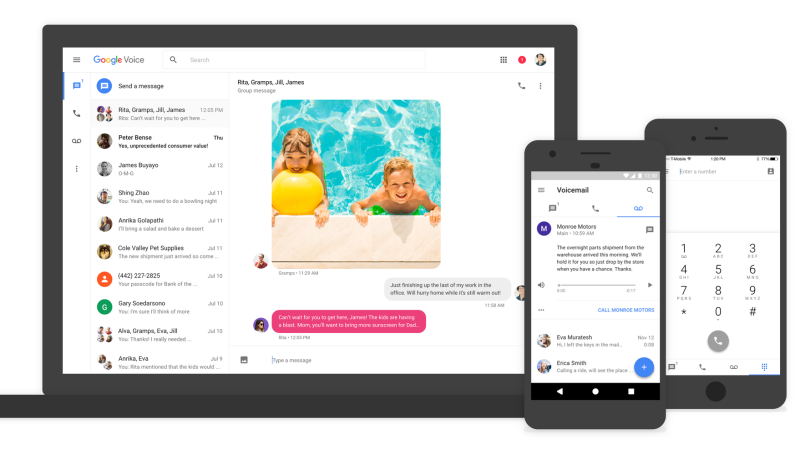 The app looks beautiful, clean, and easy to use but I don’t want another messaging app on any of my phones. I’m already done with Google’s nonsense in the messaging space, but I think Google Voice is Google’s saving grace. Stay with me here. Google Voice is a cross-platform app that requires no inviting friends or getting someone to use download an app. It uses SMS and provides you an easy way to sync across multiple devices. Yes, you need another app, but it’s better than having to get everyone on Whatsapp, Kik, or Google Hangouts. Google Voice is iMessage for SMS. You’ll have all your messages on any device, and you can also get phone calls forwarded to any of your devices.

You’re able to use Google Voice for free and with any phone number from T-Mobile, Sprint, Verizon, or dozens of other mobile carriers. They do all the hard work, with the setup only taking 5 to 10 mins. If you want to dive into the Google Voice world, you can opt for Project Fi, but you’ll need a Pixel or Nexus phone.  Either way, the update to Google Voice brings us group messages and a cleaner UI that may get more people signup and be able to use their laptop or tablet to send text messages.

Tell us in the comments below if you think Google Voice is a killer messaging app hiding under all our noses or if I’m just losing my mind!