If you run a small business or online presence, then you’re probably familiar with Google Apps for Work. For a decade, Google has been providing their suite of products such as Gmail, Drive, Calendar, and Hangouts to help teams collaborate. On Thursday, Google announced a rebranding of Google Apps, which means that it will now be referred to as G Suite. The name change actually does bring along new feature announcements which is great news for current users.

First, let’s talk about the name change. Google Apps is familiar among tech-savvy individuals, but let’s admit the fact that it’s not a great name. When talking about the service, there’s possibility of confusion about which “apps” you’re talking about; this is the reason why Google tacked on the “for Work” and “for Education” later on. While the new name G Suite isn’t perfect, it’s much shorter and Google feels that it helps better reflect their mission: “…to help people everywhere work and innovate together, so businesses can move faster and go bigger.”

Many improvements have been announced to G Suite’s primary services. First, Google Drive is getting a Quick Access feature which uses machine learning to predict the files you want to access. This saves you 50 percent of the time spent in getting a file by removing the need to search for it.

Google Calendar is getting some machine learning love as well. The feature “Find a time” solves the common problem of finding a non-conflicting meeting time with your team. It has been on Android but is now available on iOS. It automatically suggests meeting times and also provides backups in case there are any conflicts that arise.

To help with research when creating a spreadsheet, document, or presentation, Google is adding an Explore feature to Google Sheets, Docs, and Slides. Instead of writing complex formulas in a spreadsheet, you can instead ask a natural language question about your data. Explore will also provide suggestions for your document or presentation based on the actual content.

Google Drive and Hangouts for teams

Teams use Drive to share files with each other all the time and we are so used to this system that we do not think twice about it. However, it is not easy to manage this access when teams constantly change in size. Google is fixing this by redefining how Drive works for businesses by managing content ownership and sharing at the team level, and not the individual user. This is great news for teams that have sensitive documents and need fine-grained controls for file access. However, it is for the moment only available to those in the Early Adopter Program. 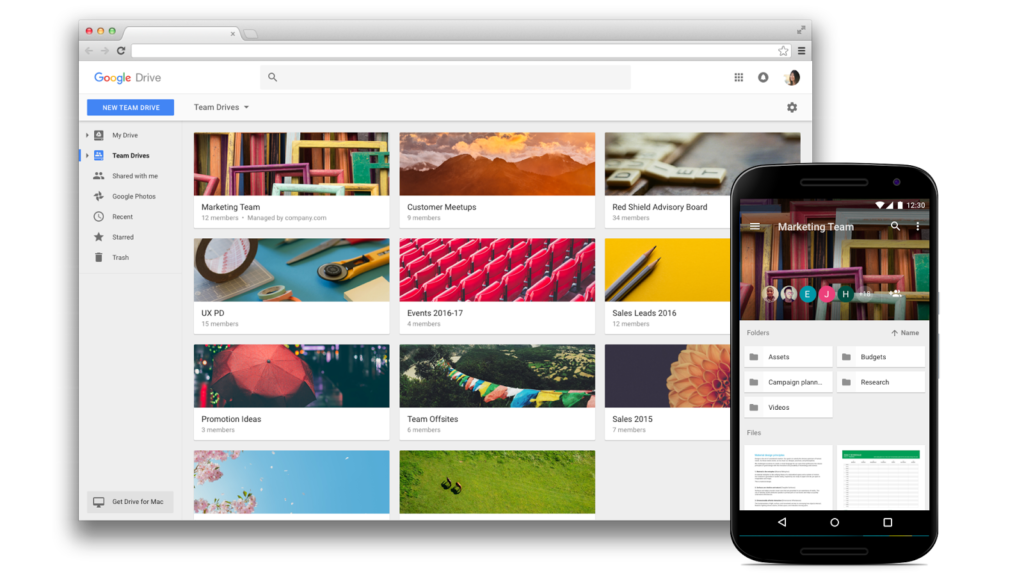 Finally, Google is improving Hangouts to help businesses with online meetings. You will now be able to setup a meeting and get both a link and a phone number. This is a feature that many other meeting services provide and is very useful when you have a flaky data connection. Hangouts will also work on any device without any downloads needed, and can accommodate up to 50 participants. Integrations with Calendar and screen sharing are supported as well. The new Hangouts for teams is also part of the Early Adopter Program.

We believe that this rebranding and onslaught of new features is great for Google and its business customers. It was a big surprise to have seen this announced out of nowhere, but it makes sense considering that we’re getting closer to their October 4th event.