Today’s smartwatches can start up an Uber app, show us who’s calling, and in Pebble’s case always shows us the time. I’ve wanted my watch to do more with less effort and waiting around for apps to load.  I want to talk to my watch and use them like Dick Tracy or the Spy Kids did, but the future is here! The Pebble Time tracks your steps, last weeks at a time, and has a first of it’s kind personal assistant called Snowy. The idea of commanding your watch to set alarms, asking it the weather, or asking it to turn the thermostat up or down. The personal assistant isn’t as powerful as Amazon Alexa, but it’s stronger than Siri or Google Now.

Snowy is a personal voice assistant for the Pebble Time. The app is free to download in the Pebble App Store, but for the license to use Snowy, that’ll set you back only $2.99. The app isn’t always listening, but with the flick of a wrist or press of a button you can ask Snowy dozens of different commands.

The idea of personal assistants aren’t new, but putting them on a watch is something a lot of folks haven’t thought about beyond the movie screens. The Pebble is the only smartwatch with a voice assistant which can help you do things when you’re unable to touch your watch.

What can Snowy do?

Snowy can listen to you ask a range of commands, but it isn’t limited to your smartwatch. Snowy plugs into IFTTT, Wolfram Alpha, and has timeline integration. The voice assistant can turn smart lights off and on, translate words from English to French, German, and others. 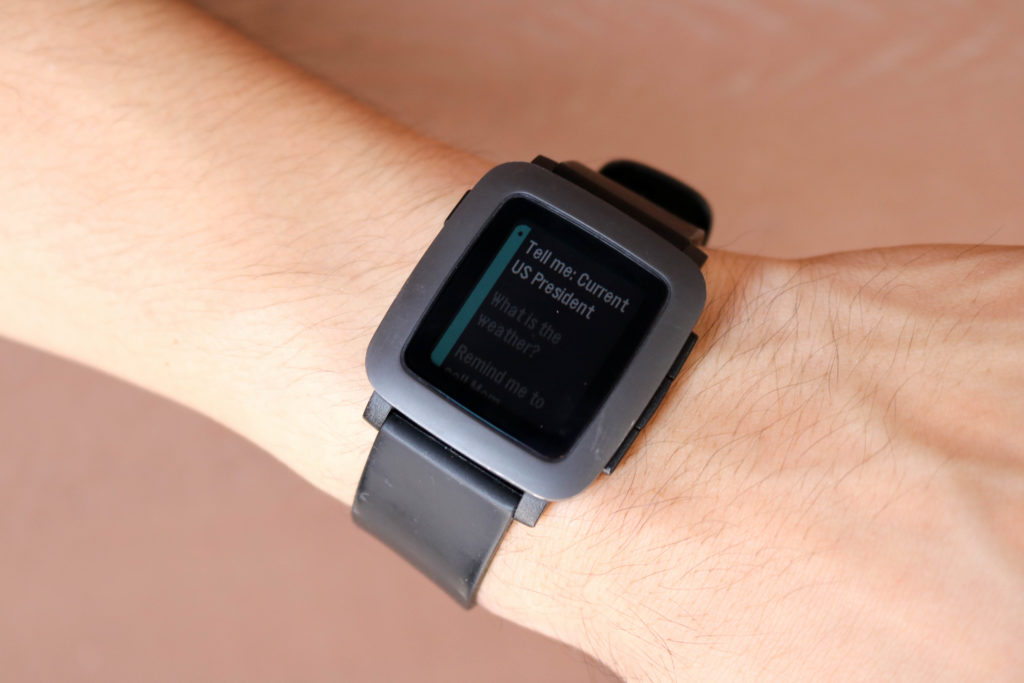 Snowy works about half of the time, the other half the voice recognition engine doesn’t understand anything. Part of the problem is Pebble watches have one microphone, and it’s not the best quality. Compared to the multiple microphones on the Amazon Echo, one microphone is going to struggle to hear everything. If Pebble were going to work towards adding Personal assistants in the watch, they’d start to add 2 or 3 microphones to filter out the background noise and try to understand better what you’re trying to tell either Snowy or maybe Alexa.

The other big issue is having to push a button or flicking your wrist to active Snowy. The app doesn’t instantly load and start listening to what you want. Instead, it takes a few seconds to load and then a few seconds to understand what you asked. All total, the app could take ten whole seconds before you’re getting the answer to your question or have an alarm set. The 10 seconds you wasted on the voice commands, could have been down through the physical buttons or directly on your phone.

The last and another big issue I ran into was having to press the buttons at all. While there is a hands-free mode, I more often than not restored to using the buttons because the voice listening window doesn’t automatically close, and sometimes the watch likes to act up. If Snowy activated listened for a few seconds, answered your question and left you alone, that would be amazing! While I’m mentioning the answers to your questions, I find it annoying there is no speaker on the watch, making Snowy display all the answers in the text.

Snowy works with a few open platforms, making it easy to use and have a growing number of commands. I love the fact I can set a timer when I have my watch on, but my hands are too dirty to get my phone out. As long as IFTTT adds more integrations, Snowy will be able to continue to grow the amount of things he can plug into. Snowy also plugs into Wolframalpha making math questions or other complex questions easy to answer as long as you understand how to phrase them. Snowy is an open platform, and it could start to open up to more third-party developers or APIs as it grows.

Overall the idea of the app is promising, because having the voice assistant readily available is most

All-in-all, the drawbacks have caused me to look down on Snowy. The idea is promising, and the intentions are there. The problem is how Snowy feels like a pieced together workaround that takes more time to use and setup than just pulling out your phone or using an app on your watch. Snowy is also at the mercy of Pebble, and their poorly planned out microphone and lack of speakers. If Pebble would add more microphones, a pair of speakers, and a way to easily activate Snowy the app could become a killer feature. Instead, Pebble is focusing on health and fitness and looking towards Alexa becoming a core part of the Pebble Core.

For now, Snowy feels like a gimmick that’s working towards making our smartwatches more powerful. I have tried to use Snowy over the course of days and weeks, but I always end up giving up and pulling out my phone. I love the idea of Snowy! I hate the time it takes – I’m looking at my watch, talking to my watch, and getting frustrated at the thing out in public. I’d rather yell commands at my phone, at least then people might think I’m either on the phone or trying to talk to Siri.

Needless to say, I drool over the idea of using voice assistants on my wrist. It seems like a gadget nerds dream, and has been portrayed in hundreds of movies over the past 50 or 60 years. For now, I’ll continue to ask Alexa to control my life in the comforts of my own home.

Tell us in the comments below what you think about a personal voice assistant on your wrist, and if you’d use Snowy on the Pebble Time.