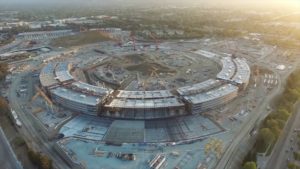 Solar Panels, Glass, and Construction Foam are the few things going on the new Apple Campus.

Apple has always been known as a company that Strives to be different.And recently with their construction on the new Apple campus that covers over 2.8 Million Square feet of land. 100,000 Sq ft of that area being dedicated to an employee fitness center. The new campus Is nearing completion. Apple CEO Tim Cook IsSaying that the new Apple campus should be ready to move into by early next year.

The mainFactor in the new Apple campus is the ability to provide its energy resources and be environmentally friendly. They’ve Recently started Installation of fuel cells and solar panels to help the facility generate over 75% of its power.

Why a new campus?

Apple, like a lot of companies, is growing. And I feel like as their user base and business grows as a whole, they feel the need to expand. It’s the right choice.

Apple currently has over 115,000 employees. The company is growing with more services, products, and in turn, they’re growing with the number of staff. They need a new campus to accommodate all the change.

Apple hosts multiple events over the years. WWDC, their hardware event in September, and usually on in March. They hold those events in various venues, all which seem to be too small for the ever-growing developers, press, and consumers.

But why a mega campus? Well, their employee count is large, and just how Google has their campus, Apple is outgrowing theirs. And supposedly 2017 is rumored to be Apples best year yet. Outgrowing their campus and having the newer one as one central place where all employees can work with different areas like a fitness center to workout, a plaza to enjoy food and relax, as well as the office spaces to… well you know, make the next iPhone. It’s a great project, and I think Tim Cook made a right decision on this one.

The new campus is also being built to facilitate an underground theater. We’re typically used to Apple hosting events like WWDC in their hardware announcements In venues like the Bill Graham Civic Auditorium. With the addition of this underground theater, it could be a possibility that we see events like WWDC at this type of venue. The new theater is rumored to be 120,000 ft.² and hold up to 1000 seats. The roof of the theater Is the first of its kind of being entirely made out of carbon fiber and being built in Dubai, then shipped to Cupertino. The impressive roof weighs in at about 80 tons. I’m hoping nap or decides to host future events as it would be cool for developers and press to be on the new campus. I’m looking forward to seeing it when it’s finished. I could see having the September event as well as WWDC in 2017 or 2018. So we’ll see.

Health is important, right? In fact, study’s show that standing up while working can increase your productivity by 49%. So Apple took the liberty of building a one hundred thousand square foot employee fitness center, coming in at a rough estimate of $74 million dollars. The fitness facility will have all of the typical amenities like gym equipment, changing rooms, and showers. Pretty sweet right? If you’re a hipster developer who likes to workout, I’d look into getting hired at Apple.

Environmentally friendly. That’s what the new Apple campus is betting on, and their new outdoor plaza will be a place where employees can enjoy the outdoors, get work done, and enjoy being with nature. In fact, I feel like working outside on a beautiful day increases my productivity. There’s just a different feeling when you’re outside.Their outdoor plaza will also be a place where employees can eat. They will also have outdoor seating to host the employees.

Apple is also buildingA new parking garage to host employee vehicles. The parking garages are lined with the solar panels to use renewable energy, and be safer/better for the environment.

What are Apple plans for the future

With the new headquarters construction starting in 2013, Apple is made some tremendous progress so far. Tim Cook expecting to be fully moved in by 2016 could be a longshot, but I think they have it under wraps. But what do the new Apple headquarters mean for us? Well, Mark Gurman states that “2017 is going to be Apple’s biggest year, ever, regarding new products.” Which could be great for us? It’d be nice to see the new MacBook Pro and an update to the iPhone in September at Apple’s hardware event.

Tim Cook is expected for the company to move into the new headquarters by early 2017. That being said there’s still more construction on the campus to be done, but they’re making a lot of progress very quickly. Hopefully, the hype of the new campus being built for also hype up new products, hoping that Apple will do something innovative in their next product lineup.

WWDC has already passed, but with the new construction of the Underground Apple theater, we could see WWDC 2017 being held there. I think it would be great to have WWDC and other Apple events being held on campus; it would make sense for the company. Although being ready to move into by early 2017, it’s all up in the air.

My thoughts on the new Apple Campus

So I have mixed thoughts about the new Apple campus. First of all, it’s cool to see an innovative company such as Apples taking the steps to do what’s right for their employees. Apple is growing, and to be real, that’s why Apple is building the new HQ. I think you will be neat to get a tour of the campus when it is all finished. The choice to go with such environmentally friendly options is inspirational, and other companies should take note of what Apple is doing, and push to take the initiative to care about the planet we live on.

All-in-all, the updates on the new Apple campus are exciting and fascinating to see. It’s astonishing to see how much progress has been made over the past year and to see the big picture becoming a reality. Especially with technology like the DJI, we can get some excellent 4k footage of the progress so far.

The new Apple Campus will produce up to 142,000,000 kilowatt-hours per year. That’s roughly 257 kWh per SQ meter per year. Easily beating out the ideal office spaces and even medical facilities with great energy labs and research facilities. Apple’s new facility is not the greenest building on the planet, but it doesn’t have to be.

Currently, the greenest building on the planet is the Sun Green Building Research Center at National Cheng Kung University in Taiwan. The building is the most energy efficient and uses just 40.43 kWh per SQ meter annually. It also produces 70% more energy than it consumes if that hasn’t impressed you already.

How we can do our part

One of the most intriguing things about the campus is the energy efficiency. As our economy has grown and vehicles and planes, as well as other emission vehicles, have been introduced, and our planet has taken a beating. We need to strive to start taking care of our planet. Using fewer emissions, more car-pulling. I think Apple’s trying to stand out with their environmental recycling program as well. Remember that keynote in May? The one where we thought there could be a new Macbook Pro announced but instead we got a recycling program. Yeah, a recycling program is cool too. I appreciate Apple’s values when it comes to being an all-around caring company. They care about the environment and their customers. So I hope they can keep up the pace with it all.

Apple campus doesn’t have to be. It’s a campus/headquarters that hosts tens of thousands of employees every day. All of them working hard to make innovative products for consumers. I like the way Apple is going to the new campus. It’s a great plan and who knows, maybe one day I could score a job there and be working at the new campus.

But I’m curious, what do you guys think? Let us know down in the comments down below!