At Google I/O 2016, Google announced Android N doesn’t have a name, two new messaging apps, a chattier ‘Google Assistant,’ Android Wear 2.0, A VR platform called Daydream, and my favorite – Google Home. Google Assistant is the name of Google’s intelligent voice assistant which will span from Google’s Amazon Echo competitor to Android Auto. The always listening assistant will likely raise an eyebrow or two from privacy advocates who questions Google’s “do no evil” mantra. Nevertheless, Google is leaning on their algorithms to do searches which are chattier and understand questions with context.

Android N, which still needs a name, which you could suggest one to them on their Android website, is vastly improved. The biggest change may come in Google’s focus towards VR on Android with Daydream. The new messaging apps are not tied into Hangouts, make Allo the 6th messaging. Below are a deep dive into the biggest announcements from Google I/O 2016. 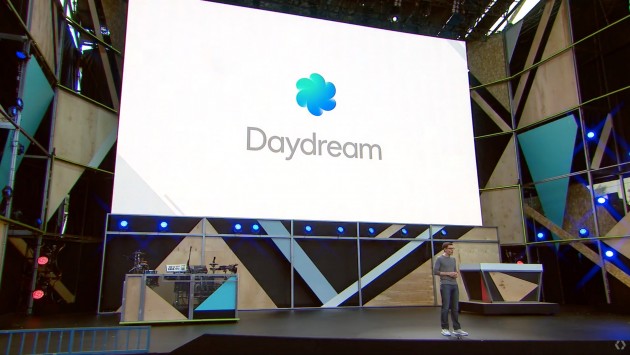 Google’s Android-based VR platform, Daydream, is designed and developed to work on Android. There are Daydream specs which OEMs from LG, Samsung, HTC, Motorola, and more are going to use to produce VR ready phones next year. Of course, you’ll need a VR headset and controller, which Google has released a demo unit that manufacturers can use as a reference. The VR headset is still style like Cardboard, where you’ll pop your phone into the headset to play with VR, but the Wiimote look alike is a unique take on the VR remote. The remote has motion controls, an orientation sensor, two physical buttons, and a touchpad to control your VR games and apps. The control looks and works a lot like the Wiimote did on the original Wii, and is different than how the HTC Vive or Oculus Rift designed their motion controllers. Either way, Google is planning for VR to become a go to entertainment and consumption method. They’re betting the mobile phone will become more than powerful enough to run HTC Vive-esc games in a scaled-down world. They’ve built YouTube from the ground up, developed a Play Movies, Streetview, and other apps for Daydream.

As you might have noticed Android N is still lacking a name. The company opted in holding off, and hosting a fun game of name Android for us. However, Google notes on the site the naming process is at Google’s discretion and it’s unlikely you’ll actually suggest a name Google runs with. The agreed upon name is Android Nutella, but the company could have problems securing the naming rights. We’ll have to wait and see what Google announces sometime in the summer. 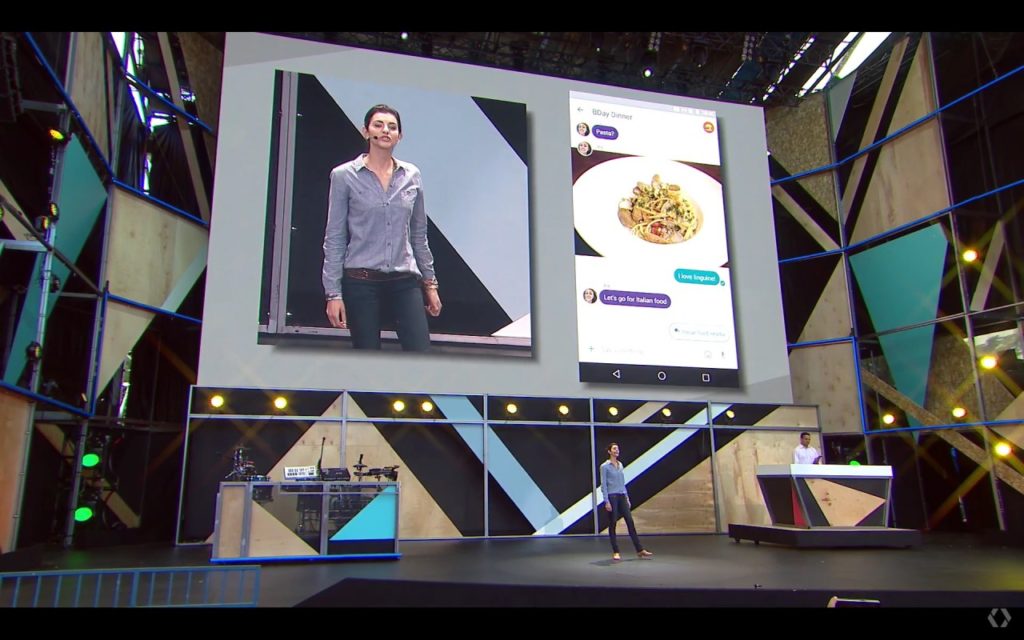 Google Allo is a smart messaging client with Google Assistant built in. The app comes with the generic messaging features such as emoji support, custom stickers, and instant messaging to maybe one friend. The messaging app reminds me a lot of how Facebook introduced bots to Facebook Messenger and made it easier to message your Facebook friends.

Allo is privacy-minded with end to end encryption which will keep your messages safe from prying eyes and even the FBI. Allo also included private notifications and expiring messages to keep everyone happy in a world of privacy-minded consumers.

The addition of Google Assistant will make conversations smarter. If you’re talking to a friend about going to a restaurant you can ask Google what the address is and to book a table. Then you’re able to send the info from Google Assistant straight to your friend. The messaging help is a little bit like what Google did with Gboard on iOS, but with Google Assistant built in.

Google Duo is a Facetime competitor because Hangouts isn’t enough for the company. The app is dead simple to use. You’ll open the app up to start a video call, and you’ll see a selfie cam. This is important because of the Knock Knock feature which enables whoever you’re calling to see a preview of you before they answer the video call.

The app is tied to your phone number, but is available on iOS and Android. Apple’s Facetime is a lot like Duo, but isn’t tied to your phone number. Facetime uses a separate app to call friends, and is dead simple with a selfie camera when you open up. Duo is cross platform unlike Facetime, but Google will have to get a critical mass of users on the platform before every iOS user has it installed.

Google’s added another messaging app and video chatting app to our phones. Instead of building Allo or Duo features into Google Hangouts, the company opts for building out another messaging platform. The last time they had this was with Google+ and Hangouts and Google Talk all operating separately. Google consolidated all these apps a few years ago, but it looks like the company didn’t learn their lesson. They’re building out more options which will likely confuse consumers even more. Like which one will come on Android N by default?! 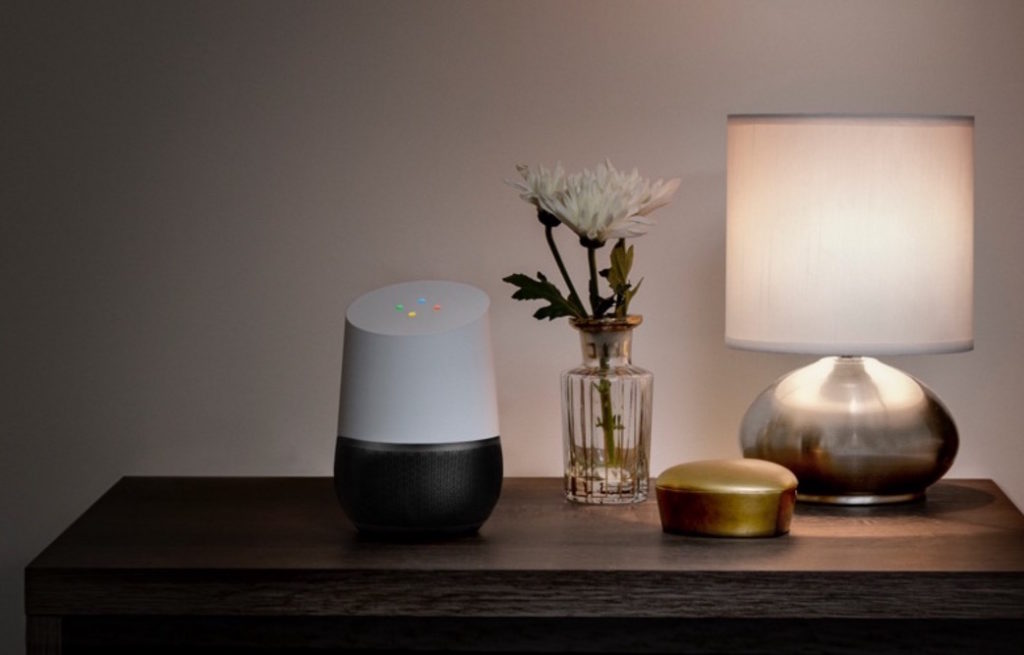 Google Home is the long-rumored Google Chirp which is essentially Google’s answer to the Amazon Echo. Google Assistant is built right in, and is always listening – creep I know – like Alexa is doing on the Echo. Google Home was only teased at I/O with little details and almost no release date. Google says the project is in the “early stages”  and we’ll see something this fall. We know Google Home will have an array of microphones listening for commands, but don’t know if we’ll say ‘Okay Google’ or have to say Google Assistant to get a response from our Google overlords.

At first, I thought nothing more of the design then something similar to Google’s Onhub. The internet took it a bit further comparing the Home to an air freshener. While it looks like an air freshener I wouldn’t mind having the device display somewhere in plain sight. I think the device looks more aesthetically pleasing than Amazon’s Echo, which is nothing more than a can with speakers and some lights. Speaking of lights, there are four colourful dots on the top which resembles Google’s colors and likely will light up when you’re asking a question or when she/he is talking to you.

Privacy is a top concern here, and a reason why Google almost didn’t want to move forward with Google Home. The company say’s ‘do no evil,’ but increasingly they are being investigated and portrayed in a way that shows them doing evil. They know everything about our lives from email, photos, search, to our location habits. Always listening devices can be scary, especially for folks who talk about a product and then Google servers them targeted ads. The company will have to walk a fine line of listening, serving ads, and staying within a set privacy policy for users ease of mind.

What does it mean?

Google will have to deliver on all these products, but as history tells they often throw a bunch of rocks hoping one sticks. The VR is an ambitious bet, but it could pay off if we start to spend more time in VR headsets. VR could also take a turn for the worse, and turn into a technology that’s forgotten about – remember 3D TV’s and displays?

Google has to answer questions about privacy first and foremost, but they’ll also have to answer if chat bots or an echo competitor is enough. Google Assistant will likely work with Nest, Google products, and the big question is “will there be an open API developers can easily integrate into their smart home products?” Amazon’s accidental success with Alexa is greatly because of their public API which let developers have access to Alexa’s voice commands.

The Daydream platform could become a turning point for VR, and become a standard for mobile VR on the Gear VR and on other VR headsets to come. It’s also brings up the question whether Apple will jump into the VR space or if they’ll wait and see like they’ve done with other products.

Google made big bets at Google I/O 2016, but if they’ll pay off is something we’ll have to wait and see. Google isn’t known for sticking with projects, but instead they’re known for killing them off – cough cough Google Reader.