We track everything we do these days from our steps, calorie intake, where we travel, to what apps we use on our computers. The problem with this is all our information stored on different services, and many times poorly visualized and hard to access. I was referred to Gyroscope by my friend @fmisle, with the prospect of having all my information visualized and easily shareable. The Gyroscope app syncs information from RescueTime, Moves, Fitbit, Withings, Strava, Runkeeper, Instagram, Twitter, and Foursquare to the app. 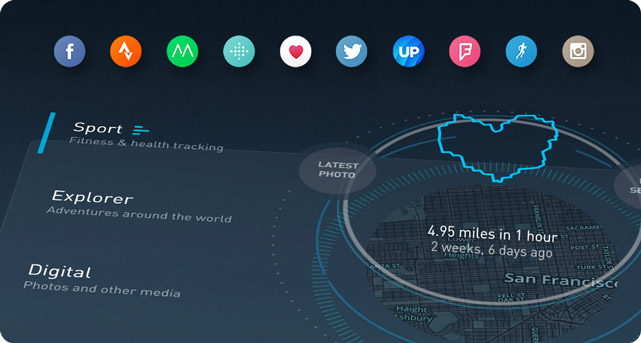 The app also syncs with Fitbit, which can enable you to sync your heartbeat, weight, steps, and of course sleep data. If you don’t use Fitbit, Withings, Strava, or RunKeeper you’re not out of luck. The app has close integration with Moves, a free app which you can install to track your steps and location data. There is also syncing with HealthKit, so any health data from Pebble, Jawbone, or other apps that sync with HealthKit can still be used.

Getting started with Gyroscope is easy, fast, and only requires a few free apps. I’ve been using a lot of the apps they pull data from for years now, and if you’re a first time user, the apps are easy to install and get started with. There are other apps which do the same thing Gyroscope does, but they typically want different health devices and don’t always sync with free apps.

The app is beautifully designed, with a web interface to check in on everything even when you don’t have your phone. There are little-nuanced features like an age counter which changes by the second, and custom pictures behind the step counter or other charts. The app is one of the most well-designed apps I’ve seen in a while, and I normally have problems with the design of an app.

The beautiful part is you don’t have to use every integration. I added a bunch right away and plan to add a Fitbit and Withings in the future. Now you don’t have to use those. Instead, you can pick only to use Moves or HealthKit. Faisal Misle, @fmisle, uses the Moves, Foursquare, and HealthKit. He was drawn to the app over seven months ago because the ability to track your health habits – heart rate, steps, workouts, weight. I joined in because I wanted to have all my information in once place, instead of inside five different apps.

Gyroscope is invite only with a public waitlist, but don’t fret! I snagged us an invite code so everyone reading can get a chance to try out the app. The invite code is ‘dbtechies‘, and if you join the app tweet both @gyroscope_app and @digitalbounds telling us why you joined Gyroscope!