Wireless headphones aren’t exciting, mainly because they’re all the same old design. Sony, the company best known for the Walkman or the PlayStation, showed off some amazing future technology. I wasn’t expecting much from the company, but they managed to blow my mind in a few short minutes. All the products they showed off within the tent were prototypes, but they were working, and they had a few of each. I asked if anything was going ever to be available for consumers to purchase, and Sony said sadly nothing had plans quite yet. They had plans for a limited release of their headphones, but it sounded more like vaporware than anything the company had hopes for a mass market.

They had wireless “headphones” that went around your head and played music without having earbuds. Of course, they offered unique minimal earbuds, that were light, sounded amazing, and allowed me to talk to the lady demoing the product while I listened to music! I was honestly amazed how I could hear the music when the headband was around my neck, and even with earbuds, I could hear everyone around me and have music that sounded amazing. The band had a power and volume button, with the other functions working through voice activation. “Arch” was the command to tell the headphones to take a photo, play music, or ask it what the weather like. The voice commands didn’t work well, but we were in an extremely loud environment, with the busy street within 5 feet of us.That’s not what everything Sony had to show off. They had a desktop projector which made your desk a computer that interacted with real

That’s not what everything Sony had to show off. They had a desktop projector which made your desk a computer that interacted with real objects like playing cards, a pencil, or even your hand motions. It was refreshing to see someone interact with everything on the desk, but I’m not sure how the desktop projector would work in a bright environment. The two places they demoed the projector they were darker rooms where direct sunlight wasn’t obstructing the projector, and I believe office lighting will likely make the projector extremely hard to see. The projector was innovative, exciting, but as the company said the projector is a concept and won’t hit the consumer market anytime soon. 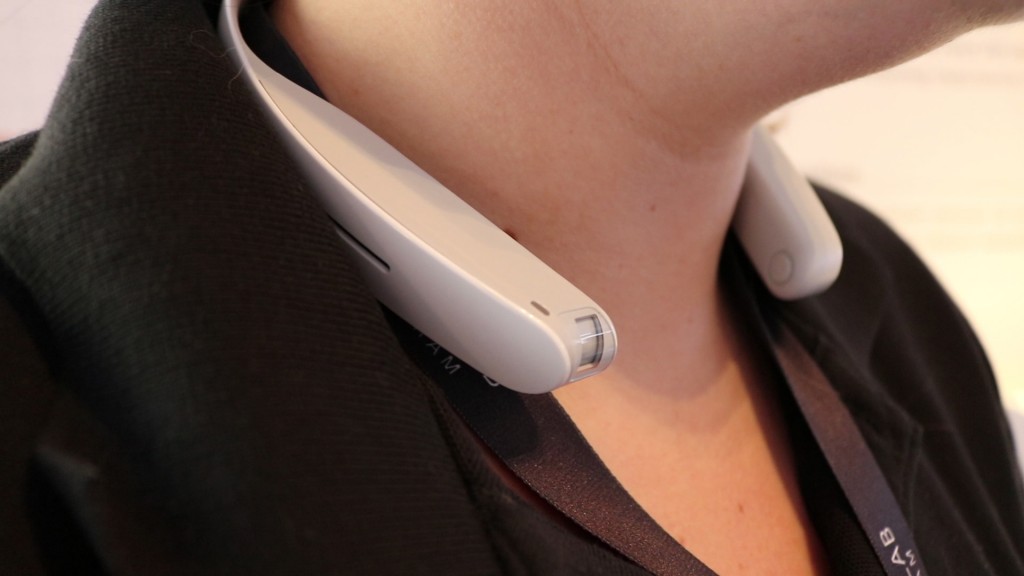 Sony’s Future Lab put a smile on my face with their astonishing open ear headphone concept and their desktop projector.  They sound like vaporware, or products that are going to have a high price tag that no one will be able to afford them. The press and news of Sony building these devices mean more companies will follow suit. Samsung, LG, and others will want to stay competitive and try to one up Sony who hasn’t done anything innovative or interesting in a few years now.