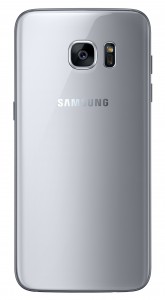 The  Galaxy S7 and S7 Edge were officially announced at MWC this morning. The new phones look exactly like the Galaxy S6 and S6 Edge, with minor refinements. The Galaxy S6 line were Samsung’s best design phones to date with their premium metals and minimal design. The company is keeping the design and feel, but bumping up the S7 screen size to 5.5 inches.

The S7 phones are also water-resistant with a IP68 rating for water and dust resistance. The S7 Edge sports a new larger 3,600mAh battery and the the S7 a 3,000mAH battery, which should get you through a whole day. The phone doesn’t have a USB-C port, but Samsung says micro USB still has fast charging and is able to compete with USB-C. While you cannot remove the battery, the fast charging and wireless charging should help keep the battery charged without having to worry about running out of juice.

The camera on the S7 is improved to make low light shooting possible. The aperture on the lenses is f/1.7 and bumped the pixel size on the sensors, to make low light shooting better than the iPhone. The first thoughts from reviewers the camera fares batter than the iPhone 6S Plus in low light. Samsung also added “dual pixel sensors” into the lens in the camera to make auto-focusing lightening fast. The Samsung S7 camera is going to claim the best Android camera this year, but then again most Android phone cameras are low quality and struggle in low light.

Samsung added a curved back, making the phone more ergonomical to hold. Thankfully too, the S6 and S6 Edge were hard to hold. Partly because the screens were so large and being all glass/metal make the phones slip out of your hands easily. Now the phones are easy to hold, and less likely to fall out of your hand but if they do don’t worry because they’ll likely survive the fall.

The refinements to the phone are minor, but needed. Samsung pushed this phone out to increase sales, and keep investors happy too. While the S7 and S7 Edge feel like the same phone as last year, and they don’t offer normal users much to upgrade to the phones will increase sales in today’s yearly upgrade cycle. Samsung’s stagnation with phone innovation could be in part to Apple’s stagnation with innovation, but with LG’s G5 phone pushing the boundaries Samsung should worry this year. LG’s phone offers a lot of new features with a premium feel, while the S7 is a premium phone it doesn’t offer much from last years model. The S7 and S7 Edge will be a hit, but will it be able to boast sales and make recent struggles within the company go away? It isn’t likely with the new phones, but maybe with Samsung marketing money they could spin the narrative around.

Tell us in the comments below if you’re going to upgrade to the Galaxy S7 or S7 Edge over an iPhone or LG G5!