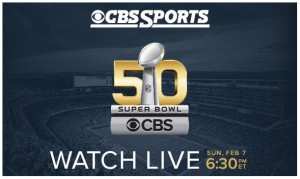 While a majority of people watching the Super Bowl today will watch the big game at a friend’s house or through a cable subscription. A few folks don’t have cable, but they won’t have to go to someone’s party in-order to watch all the ads and of course all the game. In 2016 CBS is making sure even cable cutters can watch the extremely expensive ads along with the big game. If you have a Xbox, laptop, Chromecast, Roku, Apple TV, or any streaming device with the CBS Sports app you’ll have the chance to watch the Super Bowl.

Watching the game won’t need a cable subscription or need an extra subscription to an online service. Instead CBS is letting anyone with an internet connection watch the game over the internet. So either download the CBS Sports app or head over to CBSSports.com to watch the pregame coverage along with the big game.

Cord Cutters are getting off easy this year, and CBS will get to say the most people in the history of the Super Bowl turned in over cable and over the internet. The live stream will mirror what’s on TV so you won’t have to worry about missing out on a second of anything. If you live outside the United States watching the big game is much trickier. You may need the NFL Game Pass to watch, which is $99/year (though they offer a 7-day trial period which might work if you haven’t used it already).

The game starts at 6:30PM ET on Sunday, February 7th. Tell us how you’re going to watch the big game and why you’re watching in the comments down below!