Twitter went into an uproar on Friday over the Buzzed report detailing the release of an algorithmic timeline, much like what Facebook has. Twitter isn’t going to completely kill the chronological order timeline we’ve come to love, but the algorithmic timeline will become the default on the service. Facebook has a chronological timeline you can switch to, but few know how to or the option was available. This may become what new Twitter users use, but longtime users have been outspoken and want to keep the chronological time. 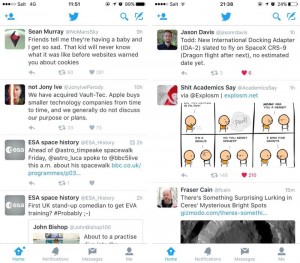 The new algorithmic timeline is going to cause problems, and make Twitter less useful for live events. A chronological timeline lets users follow a Tweet storm, live tweets from a football game, or even see what’s going on in someones life. A new algorithmic  timeline is going to break conversations, along with making follow any live events hard next to impossible. These are core values of Twitter, and making new users experience something far from the core Twitter experience. An out of context tweet, a broken conversation, or live tweets from say the Super Bowl isn’t going to make new users understand the service.

Twitter’s looking for a new product or change to get new users engaged and keep growing to combat Facebook’s massive growth. An algorithmic timeline is in the near future, and Twitter employees have taken to the service to awkwardly defend the service they helped build. We’re going to need to experience the new timeline to understand how it feels and if it truly disrupts the core user experience.

Tell us in the comments below what you think about the idea of a new algorithmic timeline!