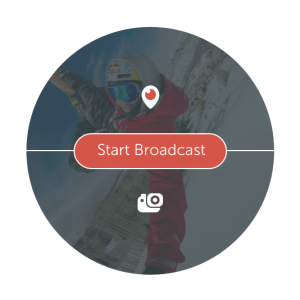 Periscope announced this morning the support for streaming from your GoPro Hero 4. GoPro camera have built-in wifi to transfer images, change settings, and see live shots or videos. Meerkat added support for GoPro cameras a while back, but for many Meerkat is an after thought to Periscope. The integration works on iOS supports the GoPro Hero 4 Black and Hero 4 Silver.

Users need the GoPro app and periscope app. Once users connect the iPhone to the GoPro’s they’re able to pop open the Periscope app to choose between streaming from the phone or their GoPro. This means we are going to see a lot of Periscopes from Drones, and the company teased about Periscopes from the upcoming XGames. Users can toggled between the iPhone’s camera and their GoPro mounted on a drone, snowboard, or even plane, or if users want to focus on the GoPro users can ‘freeze’ the iPhone screen to continue to while the phones in their pocket.

The announcement of the integrate comes a week after Twitter added autoplaying streams on Twitters timeline, and after the news of GoPro struggling sales and layoffs. This won’t make GoPro sales up, but it will likely add more value for owners to share their adventures live with their followers on Twitter or Facebook.

I’m waiting to see some amazing Periscope from the XGames, of athletes skateboarding, surfing, snowboarding, to doing other extreme stunts. Tell us in the comments below if you’re excited for the integrate and if you’ll buy a GoPro to stream to Periscope.