A day after Jack Dorsey became the permanent CEO of the company he help found a huge change to the service is released. Twitter’s been working on Project Lightening for a little over a year, and now it’s being rolled out to users across the service as Moments. Twitter works by showing tweets at the top of the page/app that are the most recent, but Moments are going to work a little different. The new tab will feature stories around breaking news, events, or trending topics. The Moment is going to organize Tweets from oldest to newest, so you’re able to follow what happened during the breaking news or event. Many Twitter users have likened this Snapchat’s stories which feature pictures more like a book than in reverse chronological order. 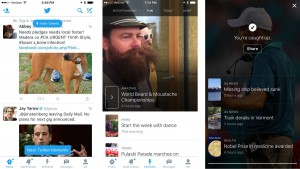 As one Twitter representative put it, Moments provides “better discovery for an easier, more delightful experience for users who haven’t been able to find value thus far.” The move is to make Twitter more appealing to Wall Street and users who haven’t been able to understand exactly how Twitter works. Moments will hopefully boast new user sign ups, along with keeping users engaged. It’s hard to believe Twitter is almost a decade old, and the public still doesn’t fully understand what to do with Twitter.

New! Find the best of Twitter in an instant with Moments: https://t.co/QAKGUSVBbT pic.twitter.com/KAjfkysVKC

Moments is launching in the US on Android, iOS, and the web with other countries getting the update in the very near future. Moments will sit in a new tab on Android and iOS in between notifications and messages. While I doubt I’ll use the new tab, many new and inexperinced Twitter users may jump at the opportunity of following an event from start to finish in one neat area. Snapchat stories have taken off with dozens being featured at any given time, which users have praised and followed very closely.

Moments will be curated by real people at Twitter,  Bleacher Report, Buzzfeed, Entertainment Weekly, Fox News, Getty Images, Mashable, MLB, NASA, New York Times, Vogue and the Washington Post. Twitter does mention expanding to new partners in the future, and how the “community continually surprises [them] with wonderful storytelling and creativity, so [they] look forward to seeing new and exciting uses of Moments from more partners soon.” The company sounds like they could open up public stories for the community to curate, which could become useful for local community events or smaller events that may not call for a national following.

The update is rolling out now so once you do get the update tell us in the comments below what you think of Moments!