Microsoft’s Windows 10 operating system has only been available to the public for a few weeks now, and oh does it pack a lot of new and exciting things including a new web browser, Edge. While Edge may be built from the ground up, and run ten times faster than Microsoft Explore, users are still going to look to third-party browser that they’ve used for years. Mozilla, the company behind Firefox, has already voiced concern over how it’s difficult for users to switch their default browser from Microsoft’s Edge to Google Chrome or their option, Firefox. 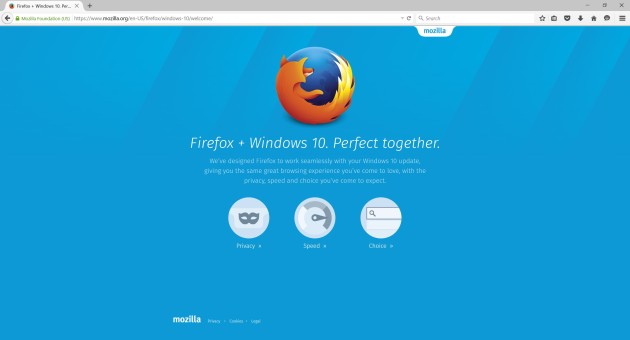 Mozilla launched Firefox 40 with features and a new look built for Windows 10. Mozilla also released versions for Mac, Linux and Android, but the main features come to the Windows version. Firefox users can take advantage of Windows 10 taskbar to search the Web using Firefox, which means being able to use Google over Bing. Mozilla also outline how add ons to Firefox will be safer in the future. Mozilla will certify each add-on that will hit the marketplace. “In future releases of Firefox, any third-party add-on that has not been certified will be disabled by default,” the company explained.

Of Course Mozilla, has improved performance and made the browser feel more streamline than previous versions. Firefox is becoming more appealing to users as Google’s Chrome has become over bloated and a huge RAM hog on many PC’s and Mac’s. While Microsoft’s Edge browser is fast, sleek, and packed full of productivity features it’s still lacking compared to Chrome or Firefox.

Tell us in the comments below if you’ll download and use Firefox 40 or if you’ll stick to the Edge browser!?