GoPro’s are used both by consumers and professionals who want to shoot video and take pictures in extreme environments. GoPro camera’s have also been on the attached to most drones made for consumers. The company is going to build their own drone that will be aimed at consumers.

“Quads plus GoPro has been one of the most enabling combinations,” said GoPro CEO Nick Woodman, who announced the new product at Re/code‘s Code Conference Wednesday. Woodman said they decided to build their own quadacopter when they realized the growth in the market reminded them of the early days of GoPro.  The drone is set to arrive sometime early next year. No word on pricing, but it sounds like it will be aimed at consumers. 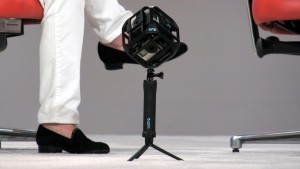 GoPro is also building a six-camera spherical array rig that will allow you to create immersive 360-degree photos and video for VR headsets. Woodman brought an early prototype with him to show everyone at Re/Codes event. The final product should arrive in the second half of next year.

GoPro uses technology from Color, a French company it acquired earlier this year, to stitch together the video or pictures from the six cameras. There is also a  mobile app that will let you view the stitched together picture or video by either spinning it with your finger or by sitting in a rolling chair and spinning.

The rig is aimed at professionals who would have the money to buy 6 GoPro’s and risk them in extreme stunts or environments. It will give brands and professionals a jump-start at creating virtual reality for the headsets and future vr rigs that will hit the market early next year.

Tell us in the comments below what you think about the consumer GoPro drone and the new camera array!