Upon unveiling Google’s new version of it’s new mobile operating system, a picture has been leaked of a Google executive holding a black phone with the branding “NEXUS”, on the back, and what appears to say “LG” on the bottom. Could this be the new Google phone coming out later this year?

Not much has been said about this “leaked video”, but a sign that  Google has shown that proves that they don’t want it to be seen is that they’ve removed the original video that this picture was seen in, but it has spread throughout the internet . This phone appears to what most believe is going to be Google’s newest phone, the Nexus 5. But is it really all true? 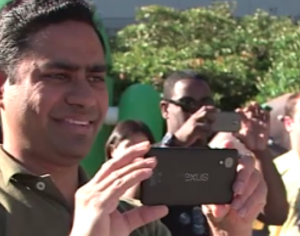 If you look at the image above, you can see that the logo on the phone suddenly changes really dark, almost indicating that maybe, just maybe, this was all photo-shopped. The picture looks really odd with the logo on the phone, but who knows? Maybe it really is the new Nexus 5? If that is true, then the specifications include:

Update: Google has removed all videos containing this picture on their YouTube channel.