There has been a lot of talk lately about Google’s ChromeCast. But is it just not enough?

I personally think ChromeCast is a great idea. And it’s cheap. Like $35 cheap. Considering the Apple TV is $99, ChromeCast is affordable for any budget. But it’s not great. Yet.

ChromeCast can currently do the following things:

And the Apple TV can do these things: 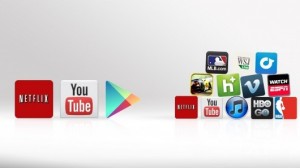 But some say that that isn’t enough for them. In my opinion, it’s a good cheap option for somebody that’s wanting to do the things listed. But if you’re someone that owns a device such as a PS3, xBox 360, or even a Smart TV, don’t get ChromeCast. ChromeCast can do the same thing those devices can and many other devices.

Google’s ChromeCast is a small thumb-drive sized HDMI device that turns any HDMI-compatible tv into a streaming hub for your mobile device. It’s a smart idea, and some say it will, and maybe already is competing with The Apple TV. 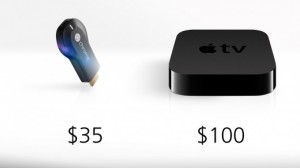 Rumors have been speculated about future updates to ChromeCast, but not a lot is known and the rumors aren’t all exactly true.

So what do you think? Will you be getting ChromeCast? And if already have it, do you like it?