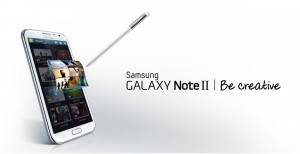 The Note II from Samsung looks at first glance to be something in between a tablet and a smartphone. The large screen to most people is a turn off, because it cannot fit easily into a pocket. I found the screen to be big but with all that extra screen space it was more of a plus then a downside. The screen allowed for Samsung to fit into the best hardware on the market. A quad-core 1.6 GHz Cortex-A9 Exynos 4412 processor allows for mutliple apps running at the same time and with the 3,100 mAh battery a power user can hardly drain the battery. The camerea sports a 8MP camera that is an OEM’s version that has some very neat additions to the stock Android camera app.

The Note II is just a juiced up, large brother of the Galaxy S III. Besides the size difference, there are only two real distinctions in design between the Note II and the Galaxy S III: 1) the reduced amount of space below the screen on the Note II and 2) the slot for the S Pen on the bottom of the device. The plastic casing holds up well in day-to-day use, but it doesn’t have that high-quality build I expected from the most expensive smartphones on the market.

The Note II comes with the latest version of TouchWiz. The Wacom Electro-Magnetic Resonance technology used in the S Pen is breath taking and provides extremely accurate input. If you use Samsung’s Touch Wiz launcher, removing the S Pen from the phone will automatically launch an S Pen screen that presents a variety of different tasks for which the S Pen can be used.

Having a digital pen to take take notes is neat and fun. Thea S Pen add even more useful features:

If you add up all the features you that this device brings to the tablet I would give it 8 stars out of 10. The phone is large and bulky but once you get over over this awkward look and feel you will come to love these amazing device from Samsung Mobile. If you have this phone and have any problems or have any  features that you think are killer leave a comment.